One of these days, Alice, I’m gonna make a great shooter for the DS!

Moon is a spiritual sequel to Dementium: The Ward, a game I reviewed early last year and gave mediocre marks. While Moon utilizes the same engine as Dementium, it is an entirely different game. Developer Renegade Kid threw off the survival horror shackles and focused on simply creating a competent shooter, and for the most part they have succeeded. Sure, there’s a hiccup here or there, but this is one of the best first person shooters on the DS. My big problems with Dementium involve the loose gunplay, useless map, and horrifyingly outdated save system. Moon fixes most of these problems, but in doing so creates a few of its own.

The game opens on, predictably, the moon in the near future. A science base has been erected, and the scientists have discovered Lost-like hatches scattered across the lunar surface. A team is sent down to investigate, but true to genre convention, they disappear. You are called in to provide reconnaissance and, hopefully, find your missing colleagues. Down the hatch you go, and in doing so you step into a heavily fortified world patrolled by drones and extraterrestrial soldiers armed to the hilt and ready for war. As you explore the machinery-packed corridors, you discover a terrible extraterrestrial plot and the records of the soldiers who came before you.

Most of the time you are confined to subterranean facilities, and this is where the game excels. Like Dementium before it, the control scheme has been lifted from Metroid Prime Hunters, minus the ability to jump. Switching weapons is seamless, as you merely touch the weapon icon and then slide your stylus to the weapon you want. Different firearms are gained slowly, but all the normal FPS weapons eventually show up: pistol, shotgun, sniper rifle, grenade launcher, etc. They are created from alien technology, though, and look really cool. Renegade Kid thought outside the box here—I especially like the look of the Lepton Spread (shotgun). A particularly ingenious feature in Moon is a controllable reconnaissance droid that can scope out maintenance tunnels. The Remote Access Droid (RAD) is equipped with its own stun gun and can get through any given area pretty quickly. Most often, the RAD is used for disabling force fields, though there are times where the player will have to switch from RAD to soldier and back again to get through an area. The RAD is also useful for finding alien artifacts and other pickups.

Walking is initially jarring in that your soldier bobs up and down almost as though he were floating in water. He definitely has a bounce to his step that’s difficult to ignore at first, but you quickly get used to it.

Shooting things is a little frustrating sometimes—the farther the object, the less accurate your shot. This seems logical until you actually experience it. You’ll be aiming in the right spot but still somehow miss the mark. Also, boss fights are best fought from a distance, making the overall loose aiming unnecessarily annoying.

Speaking of the boss fights, they’re really hard. Except for maybe two of them, these brawls will take awhile. First, the bosses tend to have tons of health. Second, their attacks are very damaging. Third, and perhaps most importantly, they tend to spawn helper droids to assist in mauling you. Some players will like the challenge, but I really hate dying six times before succeeding. What’s also irritating is that there is a dearth of boss types. For instance, you’ll fight one particular boss three times, each incarnation more annoyingly difficult than the last. Happily, the final boss is prone to getting stuck in animation loops, so he’s easy pickin’s compared to his subordinates.

Moon has a second side that’s not quite as fun as the FPS stuff: driving a Warthog around the surface. Now, it’s called LOLA in the game, but it feels like the Warthog from Halo. The little rover works pretty well. It’s just that there are arbitrary and frustrating time limits into the LOLA missions. That, in addition to unfortunately-placed checkpoints, makes getting from place to place kind of a hassle. The rover isn't game-breaking, and it is wisely confined to the first third of the game, but the whole driving experience would’ve been a lot more enjoyable without the time limits. There is also one bug with the rover that can end your game. It's actually an easy fix, though, so it's not as bad as it could've been.

The game looks incredible for a DS game and lasts as long as a console FPS. Finding all the journal entries, alien artifacts, and HP/ammo expansions might take some time, although none of them are terribly hard to find. For every three alien artifacts you discover, a bonus mission is unlocked in Quick Play mode, so the total number of stages in the game is much larger than how many are in Adventure Mode. There is no multiplayer option, which is kind of disappointing in that it limits the game’s replay value significantly, but there’s still a lot of content. The save system is competent, with save points scattered throughout each level, and the map is awesome. Thus, my biggest complaints regarding Dementium have been tactfully taken care of here.

Moon is a great first person shooter for the DS, despite some unfortunate design decisions. It's up there with Metroid Prime Hunters and Call of Duty 4. Well, aside from the timed driving.

Everything is in glorious 3D, and most things that move are animated well. The art direction is very moody and alien, especially the last few areas. The moving machinery is fun to watch.

Most of the sound effects are new, but some have been lifted from Dementium. They’re all perfectly acceptable and believable, though. However, the music is atrocious. I will mince no words here: plug your headphones into your iPod instead. I understand that the developers were going for some kind of alien-mechanical vibe, but it ends up sounding like a dying cat.

The game controls just fine, thank you very much. Even the LOLA missions control well. The aiming is a little too loose, but it’s hard to tell when it’s user error versus the game.

The gameplay almost never feels repetitive, which is a miracle given that Moon is a corridor shooter. The only exceptions are the boss fights, which are overly difficult and too often recycled. The FPS sections are great, and the LOLA stuff would be, too, were it not for the aggravating time limits.

Moon’s hard mode really is hard, so the Adventure mode will last you a long time. After you collect all the alien artifacts, the bonus missions will provide a lot more content, most of it just as fun as the main game.

Moon is one of the system’s best first person shooters. While it has no multiplayer, the story is engaging, the gunplay is fun, and it’s impressively long.

If DS first-person shooters interested me, this would be at the top of the list.
I've also heard it is dark on DS Phats :(

Did you encounter any freezing? It locked up on me after I found RAD and was told how to switch back to my main character. It locked up in the menu.

It probably is. There's a brightness option in-game too, though, which probably helps. Hell, we're all gonna switch over to the DSi in April, though, right? :-)

And GP, no, I never experienced any lock-ups. The only technicality was the glitch...it'll be interesting to see how many different glitches are in the game!

I should mention that if you report a glitch to Renegade Dog and they confirm it, they will ship you a clean copy once it's manufactured.

I should mention that if you report a glitch to Renegade Dog and they confirm it, they will ship you a clean copy once it's manufactured.

Which, depending on how the game sells, may be never right??

Still, that seems like a nice commitment from a developer.

Now it needs to get released here. We're getting Dementium soon so I guess Moon is still a fair bit off.

I think I may wait to play this game until the DSi comes out. I have a DS Phat now and Dementium felt a little dark and small.

Some players will like the challenge, but I really hate dying six times before succeeding.

I think you need to qualify that statement a bit...

I haven't finished Dimentium yet... am i a bad person!? 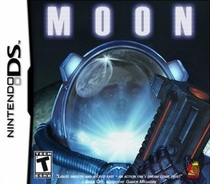