Though adorable, these ninjas are tougher than they seem.

As a fan of all things cute it’s no wonder I was immediately drawn into every aspect of this game. Chibi Ninjas talking about defending their cookie recipe from an evil Ninja is absolutely adorable. But then something unforeseen began to happen: this cute little game started completely destroying me!

The place known as Ninjatown is a peaceful community where ninjas live under the protection of the mayor. That is, until one day a volcano erupts and Mr. Demon decides to invade the town. Your "courageous" mayor puts the town's existence into the hands of the Ol' Master Ninja and swiftly runs off to cower in fear. Ol' Master Ninja quickly gathers all types of ninjas to fight and gets to work defending Ninjatown.

Like most tower defense games, keeping enemies out is the highest priority. Each level has a designated entrance and exit for enemies; allow an enemy to exit unscathed and the player will lose one point from the ten they are allotted each level. There are eight ninja types that the player will encounter, all having their own special ability, strength, and weakness.

The player is allotted a certain amount of cookies (money) for building ninja huts and buildings at the beginning of a level, and must spend it very wisely. Cookies are earned as enemies are killed, allowing the player to build more huts or upgrade existing ones. The player is also given powers from Ol' Master Ninja himself, and are able to utilize these when times get rough via the Hickory Cane Meter. One such power enables players to push back enemies if they have past your ninja defenders, enabling their defeat. After successful completion of a level, the player is given a grade from A-D and also wins a bonus ninja token that can perform special tasks when used.

Controlling Ninjatown is completely touchscreen-based and extremely simple. All one has to do is touch an area of land and choose which type of hut or building they would like to place. After that, the player just needs to tap the hut again if they want to create a specific post spot for the ninjas, upgrade them, or demolish the hut. The top screen shows the overall map of the area which details where enemies will be entering along with a bar that depicts how long it will be until the next wave of enemies, and what type they will be. If a player ever needs a bit of help, the Ol' Master Ninja powers are accessed by touching the hickory cane in the top left corner of the touch screen. This brings up a menu with the different powers, and as long as enough power has been stored all it takes is a tap to access them.

Simplicity was the key when designing this game and this concept shows in its graphics. The areas are just detailed enough to give the game a crisp look, but not overly detailed as to take away from the art direction. Everything is bright, colorful, and basically designed to be ironically adorable. While they could have added more flair, it probably would have been a distraction.

Ninjatown is a wonderful experience overall, and never feels frustrating despite its challenge. While there may be a specific formula to beating every level, it's the trial and error that allows ultimate success to feel so very gratifying. Parents beware: while this game may seem cute and colorful, it will not likely appeal to your small child. However, everyone else should put this charming game on their list.

The simple and colorful graphic design gives the game a charming atmosphere. The characters are cute and perfectly detailed, never being too complicated or too simplistic.

While not entirely memorable, the soundtrack suffices with a compilation of songs infused with traditional Japanese sound. Not to mention the incredibly satisfying little punching and shooting clips of your ninjas beating their enemies into oblivion.

For the majority of the game, control is made seamless through use of the DS touchscreen; however, some special moves require blowing into the microphone and have a frustrating delay.

A typical tower defense title that is fun and challenging. With varied levels and new ninjas, huts, and moves being introduced regularly, the game stays fresh and fun from beginning to end.

Every level has its own unique personality, allowing gamers to come back any time they want. Earning a grade encourages replay, as the first time through a level may not result in the highest mark.

Ninjatown is challenging, fun and incredibly entertaining. Whether you're in the mood for a quick five minute session or want to play longer, Ninjatown has a level for everyone.

Shawn Smith (creator of these characters) is a friend.  He asked me to make a custom "Plushform" for a show he had.  Plushforms are like blank Ninjatown characters.

I need to check this game out. I love tower-defense games.

I was ridiculed in this thread after declaring the game a masterpiece --> http://www.nintendoworldreport.com/forums/index.php?topic=26524.0

I played the six-level demo and was bored by the fourth level.  All the levels play alike.

Since the enemies follow pre-determined paths, you just need to find choke points and place as many ninjas as possible.  For the most part only the orange (heavy) ninjas and the ones that took out the flying devils were necessary.  I occasionally used the snowball ninjas (to slow fast opponents) but everything else seemed rather pointless.

Well, boredom is subjective.  If you don't like tower defense games you just don't like them, but this game seems to be a great example for the genre.

And yes, the first four levels are extremely easy but it does start to get tricky on level 6.

But the strategy on level 6 was the same as on level 1!

I honestly never played the demo, I just saw Ninja Town and did my thing where cute=must have. So, in response to statements describing how the same tactic works in every level, although I tried it many times as the game progressed, I never found it to actually work.

For many levels, one can assume they should put the orange ninjas at every entrance and exit point, however certain levels either don't allow this by severely limiting your starting money, creating multiple enemy entrance points, or spawning waves of enemies that require different ninjas each time.

Of course, once an adequate supply of a variety of ninja types is established there is a very good chance of survival for the player. However in many cases the game likes to throw a superior ninja race as the last wave and leave you wondering why you didn't have more of "insert particular ninja" on the grid.

Then you lose, blink a lot at your DS screen, scream multiple random profanities and try again.  :P

The only tower defgense I played much was Patch-Con: Defend The Library! which isn't very traditional in that it has mobile units that you produce and command rather than static towers. Of course if PatchCon counts then I guess the Fibre hostiles mode and Micro Modules resource system which I implemented count, as does Complete Annihilation's Chicken Defense mode...

This game is really, really, accessible fun. It's a unique twist on TD.... and it's perfectly sized for portable on-the-go gaming. I just got a copy and played it obsessively till I beat it during bus rides and before sleeping.

This game is really, really, accessible fun. It's a unique twist on TD.... and it's perfectly sized for portable on-the-go gaming. I just got a copy and played it obsessively till I beat it during bus rides and before sleeping. 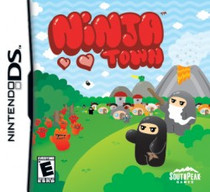