Mix one part fighter with one part creation, then bludgeon to death with mini-games and repetition.

Monster Lab is an amalgamation of parts, a fact that is reflected in its gameplay. One part fighter, another part creation, and yet another part mini-game collection, it sees varying levels of success.

Players assume the role of Professor Fuseless' latest apprentice who is fighting to stop the evil Baron Mharti, who is using his evil science to oppress the Mad Science Alliance and reign the Uncanny Valley at large. In order to defeat him, players must craft a variety of monsters and work their way through the variety of Uncanny Valley locales until they reach the baron's homestead.

Monster Lab is separated into two distinct halves, each of which impacts the other in varying ways. Within Professor Fuseless' lab, your home base, players craft new monster parts and assemble new monsters which are then used in battle. Crafting new parts is done by using a variety of machines, all of which trigger a simple gameplay mechanism: choose two ingredients, and then play the mini-game associated with the part (arm, legs, torso, or head). Your performance within the creation mini-game determines the integrity and strength of the part that is produced. Being that the game is so heavily focused on monster creation, players will naturally desire as many spare parts as possible to create the ultimate beast; the downside to this is that the constant part creation forces players through the same mini-games over and over. This only becomes worse later in the game, as the featured mini-games grow more and more awkward to control.

Monster Lab's other half involves exploring the locales of Uncanny Valley, battling free-roaming monsters and taking on a variety of mini-game challenges to earn ingredients for monster creation and items necessary to complete assigned tasks. The mini-games featured in this half of the game are more varied, but tend to be just as repetitive and unfulfilling. Furthermore, you’re forced to read instructions every time you play a game, regardless of how many times you've read them before.

Thankfully one portion of the game that involves no mini-games whatsoever (but might be considered one in and of itself) is combat. Battling in Monster Lab is done via a turn-based system that allows players to choose a function each turn, whether it's attacking, defending, or recharging. Each part of the body has two functions, each consuming a different amount of energy, dealing a different amount of damage, and effecting different parts on your opponent’s body. Your opponents are structurally similar to you, which means their parts adhere to the same rock-paper-scissors paradigm (Mechanical, Alchemical, Biological) in terms of dealing optimal damage., Combatants may lose body parts as damage is dealt, prohibiting them from performing attacks with the lost limbs. Winning requires players to either destroy their enemy's torso or all of their limbs (including their head). Following a battle, players will have the ability to repair all of their damaged parts … with yet another mini-game.

As a whole, battling in Monster Lab feels unfulfilling and repetitious. It’s a truly is a fun experience at first and it seems to have considerable depth, yet as you delve further into the game you start to realize that the strategy you use changes little from battle to battle. Performing the repair mini-game following battle (which is unavailable in any other mode), grows unbelievably boring and aggravating as it is the definition of a waggle-fest.

Graphically, Monster Lab is also unimpressive. The game is saved to a degree by its interesting art direction, but its early PlayStation 2-quality graphics just don't hold up to today's standards. However, excellent voice acting and sound effects complement the game’s style, as does the fitting, catchy sound track.

Though an amicable attempt, Monster Lab is plagued by a number of issues. Monster creation falls flat, not feeling truly creative or interesting. Mini-games are excessive and as one would expect, entirely Wii Remote feature-based. Battling is unfulfilling as well because getting into a fight does nothing but net creation parts that are neither unique nor hard to come by. Had the game featured some RPG elements, grinding through battles would've been more tolerable; but instead, with no real reward and no true variation, battling is just another piece of the overall experience that falls short. Monster Lab is best left for rental; it exhibits some interesting traits, but overall will grow too repetitious for most to bear.

The game's art direction is decent, but its overall presentation is dragged down by the low-polygon models and rough, early PlayStation 2-quality graphics. The rim lighting highlights the hideous models, making the graphical shortcomings that much harder to ignore.

Fitting, catchy music is interspersed throughout the game and the fully-voiced dialogue is also funny and emotive.

The controls work fine for most of the game. A number of mini-games control less than perfectly, which has a significant impact on gameplay.

The entire Monster Lab experience feels unrewarding and tedious, and will probably discourage most from finishing the 12-or-so-hour quest. If players do feel compelled to push through it, there are a number of parts and monsters available for creation, which should last them quite a while.

Monster Lab is a decent attempt at a new experience, but it falls flat in a number places. A more robust creation tool, more RPG elements for combat, and less mini-games would've propelled this game from mediocrity to critical acclaim. Unfortunately, players are stuck in the same boring gameplay rut for hours on end. Combine the tedium with a lack of challenge, and there is little there compelling players to ever bother finishing the game. 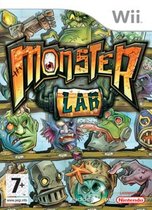