Sting Entertainment has successfully created an innovative RPG party game that is tons of fun with family and friends.

Nintendo consoles have long been blessed with enjoyable multiplayer games. This tradition has continued with the Wii, which has already received great party titles like Boom Blox, Wii Sports, and Super Smash Bros. Brawl. Joining the already stellar list of party games is Dokapon Kingdom. Sting Entertainment, developer of the cult classic Riviera: The Promised Land, has used their extensive knowledge in making role-playing games to create a unique and highly addictive game that is at its best when played with friends and family.

Dokapon Kingdom is a virtual board game where up to four players compete to earn the most cash. A spinner determines the amount of spaces a player can move each turn. In normal mode, you can choose the number of weeks the game will last. A full day of game time passes once all players have completed their turns. On-screen prompts help explain the rules as you play, making it easy for anyone to jump into the game. Thankfully, the prompts only appear the first time you encounter something new and can easily be turned off.

The story is simple: Dokapon Kingdom has been invaded by monsters, and the king has assembled a ragtag group of heroes to bring peace back to the land. As players explore the world of Dokapon, they may encounter traveling merchants, a friendly anthropomorphic mole, or even robot assassins. Landing on an empty space, or one already occupied by another hero, triggers an RPG-style battle. During combat, you get an offensive and defensive turn. A battle will resume on the next day if neither combatant can muster a lethal attack. Battles are actually very similar in practice to a game of Rock Paper Scissors. An attack may be very effective against one defensive move while almost powerless against another. The battle system is very gratifying, especially when successfully countering an opponent's attack and defeating him.

At the start of the game there are only three jobs to choose from -- Warrior, Magician, and Thief. Each hero must also be assigned a name, gender, and favorite color before the game has begun. As players defeat monsters they will level up their job and eventually master it. At any time in the game you can visit Dokapon Castle and switch your job. To unlock new jobs you must meet a predetermined set of requirements. For example, a player who has mastered the Warrior and Thief jobs will be able to become a Ninja. Changing jobs gives you access to new field and battle skills, such as a full HP heal, and may increase the number of items you can carry. Discovering all the jobs can take a long time, especially when some of the necessary items are well hidden. New jobs often come with a new haircut that might come in handy during the king's hair styling contests.

While players have a wide variety of methods to accrue cash, the most lucrative strategy is by liberating and taking control of monster-infested towns. The monsters occupying towns are usually a bit more difficult to defeat than those roaming about on the empty spaces. Once a player gains control of a town, he or she can invest money in it to make it even more valuable. Taxes can be collected from towns, which can be a great source of income when you want to buy a new weapon. At the end of every week, the game details how many towns and cash each hero has collected.

Balance and fair rules are very important in a strategic game like Dokapon. Sometimes, special events will occur at the end of a week that will try to knock a player off balance. For instance, everybody might get sent to the coliseum, where they must all battle to the death. Ultimately, players will decide who wins for themselves through the successful domination of towns, smart use of items, properly supplying a character with the best equipment and skills, and defeating and stealing from other players. That isn't to say the game won't ever give out a helping hand to someone in need. It is sometimes possible for the person losing to become an evil Darkling, who can return monsters to captured towns and perform other dastardly deeds.

The artificial intelligence in the game is very good. Often, it will behave like you would expect a human opponent to play. Playing the game alone can be fun for a short period of time, but just like in the Mario Party series, it becomes extremely annoying having to watch the moves made by the computer characters. While the game does allow you to speed up the computer's turn, there is no way to completely skip it. Also, the computer seems to have a knack at getting a perfect spin when it needs it the most.

There is only one board in Dokapon Kingdom, but it is extremely large, filled with multiple shops and caves to visit. One of my favorite features is the ability to save your game at any time. This feature comes in handy when playing through the Story Mode, which can last over ten hours. The Story Mode doesn't actually have all that much of a plot, but the king does offer a large number of side quests within the overall quest. There are also a few extra modes in which players can change the game objective, such as declaring the winner to be the first person to capture a certain town.

Atlus did a wonderful job of translating the game. I personally got a kick out of the feline merchant who always makes cat noises. Usually, NPCs have voice acting for select parts of their conversations. The mix of spoken word with reading is a bit strange, but it works. The music is quite good and perfectly fits the game. Even though you will hear some tracks constantly, like the battle music and the map screen theme, they never become bothersome. Dokapon Kingdom has a very appealing anime art style, but it does not push the Wii hardware. Because the game was released on the Wii and Playstation 2, there are no enhancements to the graphics other than adding 480p and widescreen support. Sadly, Dokapon Kingdom is lacking online play, which would have been blissful. Hopefully, Atlus will see the potential for a Dokapon sequel that supports Nintendo Wi-Fi Connection and WiiSpeak.

Dokapon Kingdom can elicit a roller coaster of emotions from a participant. There are some frustrating moments, but skilled players will be able to persevere through the worst the game throws at them. Not everyone will be drawn to Dokapon Kingdom, but I think anyone willing to give it a chance, especially those who enjoy Japanese RPGs, will find a deep and enjoyable multiplayer experience.

The graphics are very colorful, but they don't come close to using the power of the Wii.

Well-composed music is appropriate to the setting and will be heard over and over again. The limited voice acting is intentionally humorous.

The game works great with the Wii Remote, Classic Controller, and GameCube controller. If necessary, you can just pass around a single controller during multiplayer. Motion controls are not utilized in any way.

Strategy and skill are needed to succeed. The game is fun as long as it isn't the computer's turn.

Dokapon Kingdom is a smartly designed party game that is hard to put down when playing with friends.

This is intriqueing. A board game with RPG elements? A 10-hour story mode! ATLUS?!?!

... I almost want to buy this game now. Anyone else out there have impressions to tip me over the edge?

It's $20 on amazon right now. I bought it from there this weekend, but I can't open it until Christmas (or my wife wont be happy with me). The game looks great, though, but I do enjoy the Mario Party games.

I actually also enjoy Mario Party games, and the melding of a story and adventure elements makes me view this with interest.

Oh totally. I never play the Mario Party games in single player mode, but this looks pretty fun playing that way. All the videos I watch of the game give it a really nice charm. I wish it was an online game so I could play it with my party game/rpg playing friends.

At $20 I'm willing to buy this and shove it down my friends' throats.  Thanks.

Update, Amazon now has this listed for $15. That is an amazing deal.

Also, before I picked up this game, I read this review, and it helped cement my decision to pick it up. I still haven't received it in the mail yet, but I know I'll have some fun with it.

Update, Amazon now has this listed for $15. That is an amazing deal.

That's part of today's deal in the "15 Days, 15 Deals" thing they're doing in the video game department.  It's rather annoying to have missed out on the extra discount, especially since that's the only thing that appeals to me in today's deal.

In other words, if you want it at that price, you have to buy it today.

I read this review and watched some trailers of the game and was sold.  Can't wait to get this thing going at the next game night! 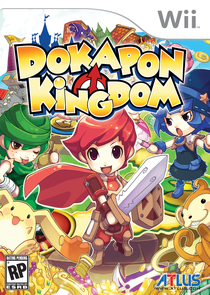