This time you don’t have to put up with Jim Kelly being QB BILLS.

I have to admit I’m an old-school Tecmo Bowl fanboy. One of my fondest memories is an epic seventeen-hour, all-night, full-season Tecmo Super Bowl (NES) marathon that started near the end of Super Bowl XXVI (with the Redskins well ahead of the Bills) and ended around 6am the next morning. My Kansas City Chiefs lost to the San Francisco 49ers in the divisional playoffs that season, but my lifelong affinity for the series was cemented.

To my delight, Tecmo has breathed new life into the Tecmo Bowl franchise with Tecmo Bowl: Kickoff for the Nintendo DS. Featuring all the typical modes (Preseason, Season, Exhibition) that Tecmo Bowl games are known for, this new version also adds stylus control, full team editing, and online play via the Nintendo Wi-Fi Connection. It also confirms that what was charming in 1992 – that is, a sometimes-awkward Japanese interpretation of an American game – isn’t quite as charming in 2008. It’s the same old Tecmo Bowl in ways both good and bad.

The Tecmo Bowl series has always been about blending arcade-style gameplay with simulation elements, and Tecmo Bowl: Kickoff is no different. There is a Preseason (exhibition) mode, Season mode with full tracking of offensive and defensive statistics, and a mode in which you can create your own All-Star roster. In Season mode you have to also contend with weather (rain, snow, or clear). It’s a pretty simple game of football, with each player choosing from a total of eight plays (four rush and four pass). The idea on defense is to predict your opponent's play, which sounds overly simplistic but is actually quite enjoyable, especially against human players online. You’re constantly trying to outsmart your opponent by avoiding the obvious play in any scenario. There are some added wrinkles, like players getting “hot” (i.e. a statistics boost) after successfully executing a series of plays, but for the most part it’s still the same Tecmo Bowl you remember. You can do the old zig-zag move to get away from defenders, if you choose the other person’s play it’s an all-out blitz, and spectacular plays result in dramatic cut scenes. Series veterans will be able to jump right in.

The one area that has undergone considerable change is the game’s control scheme. Stylus control has been implemented, and that’s a good thing because D-Pad control is extremely clunky. There’s a strange delay when performing simple actions with the A button, like choosing a player on defense before a snap or controlling the kick strength meter of a kickoff. On kickoffs you actually have to press the button at 50% in order to get a 75% strength kick, which makes accurately gauging the depth of your kickoff difficult. It’s the same for field goals: an arrow moves up and down and you have to press the A button when it’s in the middle. It’s very hard to get the kick you want.

Using the stylus, however, is an entirely different experience. It’s obvious that Tecmo Bowl: Kickoff was designed with stylus control in mind, especially when passing the ball on offense. When using the D-Pad, it’s hard to distinguish which receiver you’re targeting because the “selected” icon isn’t much larger than the “unselected” icon, and on top of that they’re virtually the same color. With the stylus you simply tap the touch screen to have your quarterback drop back, lead him around by drawing on the touch screen Phantom Hourglass-style, and tap a receiver to throw to him. It’s very quick and intuitive, making stylus control pretty much mandatory—even though it lacks the classic Tecmo Bowl feel, and controlling a running back does feel a little detached.

The stylus is especially advantageous for navigating the team editor menus. Players are able to edit team names, logos, uniforms, and playbooks, as well as customize player names, numbers, and skills. A finite team pool of skill points are distributed among your players, meaning you can’t arbitrarily max out every player on your team. Furthermore, when a team and its players are edited, they remain in their edited state and the custom roster is used by the game from that point on. You can also equip players with certain bonus powers, such as extra sack avoidance, or increased statistics when their team is trailing in the fourth quarter. The one puzzling omission is the ability to create your own team logo; you’re forced to choose from a limited number of pre-made emblems, meaning that the closest approximation to the logo of my Atlanta Falcons is a threatening-looking rooster. Still, the editor is very comprehensive, and is obviously included so that die-hards can customize each of the game’s 32 teams to reflect their real-life NFL counterparts.

Players can take these edited teams online, as well. For the first time outside of PC emulation, Tecmo fanatics can challenge other players across the country and around the world via the Nintendo Wi-Fi Connection. Online play is very stripped-down, limited to player trades and an online version of an exhibition game. In an auto-match you don’t even see the name of the person you’re playing against, so the experience isn’t much different from playing the computer. I encountered occasional lag in online play and even got disconnected once or twice, but typically the game experience is very smooth. Playing against human competition is definitely more fun than playing the computer (which is as terrible as ever), so the addition of online play is certainly appreciated.

From a graphical standpoint, Tecmo Bowl: Kickoff looks very similar to the franchise's early SNES incarnations. It doesn’t even attempt to emulate the franchise’s 16-bit visual pinnacle, Tecmo Super Bowl III: Final Edition. There is snow and rain, but the field and players look as vanilla as can be. Kickoff's graphics can be described as a hybrid of the NES and SNES versions of Tecmo Super Bowl, looking smoother and cleaner than the NES version but lacking the vibrant colors and end zone logos of the SNES version.

There are some presentation oversights as well, such as the top screen’s scoreboard never telling you where the ball is placed (e.g. instead of saying “3rd and 5 on Atlanta 15”, it just says “3rd and 5”). You should be able to get this information at a glance, instead of having to look at the playing field to figure it out. The classic Tecmo cut scenes during big plays also make a return, but they’re very generic and don’t do much to enhance gameplay.

The game’s sound effects are comprised of the typical “hike” and “hut” voice samples that will be well-known to veteran players. The musical score features rock’n’roll remixes of themes from Tecmo's past, along with some new tunes to liven things up a bit. It suits the game with an acceptable amount of late-80’s hairbandish retro-cheese.

For long-time Tecmo Bowl fans looking for a new fix, Tecmo Bowl: Kickoff gets the job done as a solid, if unspectacular, entry in the storied franchise. However, neophytes are unlikely to appreciate its arcade spin on football and retro-gaming appeal. Giving players the ability to edit every piece of team and player information in the game is a great feature, and the online play is welcome and sure to extend the life of the title, but in the end it all seems a little too barebones. You can’t help but wish that Tecmo put a little more attention into the details that place Kickoff’s predecessors amongst the most cherished titles in gaming.

Kickoff’s graphics are very pedestrian, falling somewhere between the NES and SNES versions of Tecmo Super Bowl in terms of detail and polish. They’re clean and there’s no slowdown, but there’s nothing exciting here either. Cut scenes are disappointing, lacking the flair of past titles in the series.

There are some nice rock’n’roll tunes throughout, which is sure to please followers of the series. The QB “Hike” and “Hut” sound samples are also back in full force. The game sounds exactly as you’d expect.

Controlling the action with the stylus is smooth and responsive, and navigating the menus is a breeze. Using the D-Pad and A-button control scheme - sure to be the initial choice of any Tecmo master - is a nightmare, with a mushy, delayed, and unresponsive feel that makes it almost unusable.

This is classic, old-school Tecmo football straight out of 1992. You play offense and defense exactly the same way, you can zig-zag away from defenders, and guessing your opponent’s play results in a jailbreak blitz. Veterans of the series won’t even need to look at the instruction manual, but that doesn’t mean some innovation beyond stylus control wasn’t in order. It sometimes feels just a little too familiar.

You’ll be playing Season mode for a while, but online play is what really extends the life of this title. However, because the online experience amounts to playing an exhibition game minus the the dumb AI, you’ll likely tire of it after a while. I’ve had some online matches in which I swore I WAS playing the computer.

Tecmo fans will not be disappointed with Tecmo Bowl: Kickoff. It’s a handheld version of 16-Bit Tecmo Super Bowl in every sense of the word, and the ability to play your friends online makes the entire package that much sweeter. Being able to edit virtually everything about your team is also a boon for completionists. However, after playing for a while you can’t help but wish that Tecmo wasn’t quite as faithful to the source material, paid a little more attention to detail, and added a few more bells and whistles this time around. Those new to the series are unlikely to appreciate its nostalgia factor, and will probably wonder what the fuss was about.

I don't think it made too much of a difference as to who reviewed this game because this review basically sums up my feelings about this game.
I love it because its Tecmo Bowl, but it doesn't bring anything new to the table. It's kind of like Super Dodgeball Brawlers because its a new game that seems like a slave to the older versions of the game.

That being said, I enjoyed renaming the Green Bay team the Packers and changing the player's names to relevant Packer players.

This game is such a straightforward port of the old Tecmo SNES games that I couldn't help but review it quickly.  I mean, it's almost literally Tecmo Super Bowl on the SNES put onto the DS.

This game is such a straightforward port of the old Tecmo SNES games that I couldn't help but review it quickly.  I mean, it's almost literally Tecmo Super Bowl on the SNES put onto the DS.

Well Lindy someone would wonder why the stylus control is fluid and the dpad control is clunky it's usually the other way around.

What I find strange is that IGN said the exact opposite of me.  I don't know what they're smoking, I found the D-Pad control (button responsiveness, specifically) to be terrible.

What I find strange is that IGN said the exact opposite of me.  I don't know what they're smoking, I found the D-Pad control (button responsiveness, specifically) to be terrible.

Maybe something is wrong with your DS?

I can't be...I've never had any other problems, ever.

Players are able to edit team names, logos, uniforms, and playbooks, as well as customize player names, numbers, and skills.

The one puzzling omission is the ability to create your own team logo; you’re forced to choose from a limited number of pre-made emblems

These two statements conflict.  Did you mean you can assign any team a premade logos but can't create your own? 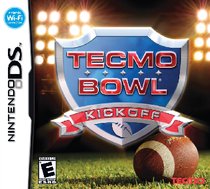