While Crash's controls are great, his latest game's shallow gameplay and focus on backtracking kills his bandicoot buzz.

I have not played a Crash Bandicoot game since the PlayStation era. As far as I knew before this game, this series was struggling to swim in a sea of better games. The latest game in the series on Wii, Crash: Mind Over Mutant, is not a perfect game, but in an age where platformers are dying, it's a breath of fresh air despite some problems.

The story to this game isn't too important, but it is actually very funny. It's very self-referential and aware that it is a video game. The series' perennial villain, Neo Cortex, is back, and he's aided by the series' first villain, as we are reminded in a joke in an early cut scene, Dr. N. Brio. Cut-scenes regarding the main story are done in a different style each time. I've seen an old film-style cut-scene and even one where the main characters are presented as sock puppets.

Inventive storytelling methods aside, the game has no apparent problems. Crash is a perfectly exuberant star, and the controls are relatively intuitive. The only problem I ran into with the controls was on the occasion when the speedy little bandicoot would run too fast and either almost or completely run off the edge. As far as motion controls go, Crash's trademark spin is done by a flick of the wrist and works quite well. Due to the still camera setup, jumps are occasionally hard to judge where you land. However, Crash's shadow is always shown on the ground, and this aids in fixing the problem.

After the controls set in, players are then introduced to the mutants, who saw their beginning in last year's Crash of the Titans. Mutants are creatures that Crash can mind control and get to do his bidding. This is the beginning of the end. With the exception of a few Crash-only parts, all of the focus from that point forward is focused on which mutant is needed to use to solve each puzzle. The game is dictated by finding mutants to clear obstacles.

This segues nicely to the absurd amount of backtracking that is necessary in the game. After about an hour of fun time with the titular bandicoot, the game soon turns into a hunt to find the proper mutant to solve the problem at hand. This involves traversing over the somewhat barren overworld many times so you can do something like "find a mutant that spins." Last time I checked, Crash could spin; why can't he spin through the stupid wooden fence? Backtracking works in some games, namely Metroid, but the areas in this game offer little-to-no exploration, which makes backtracking even more tedious.

Throughout the game, Crash collects mojo, the upgrade currency of his world. Crash and all of the mutants can be upgraded, but you have no control over what gets upgraded when. Along the way, there are also some unlockables to be found, such as art books and hero skins. However, these are little more than small bonuses.

Crash: Mind Over Mutant also contains a drop-in, drop-out cooperative mode that makes use of Crash's sidekick, Coco. While it is fun, as both players can switch between the characters, mutants, and a weird tiki mask that shoots chickens, the lack of control over the camera cripples any fun that can be had in co-op. The camera only follows one character, who can very quickly leave the other one in the dust.

Crash's latest Wii outing is not without its faults, and most of the faults lie in the structure of the game. With too much focus on backtracking, this well-controlled platformer goes awry. The charming story and genuine humor are far overshadowed by the shallow gameplay. The mutants hurt the game even more. Playing as Crash Bandicoot is still fun, but this game is not so much Crash: Mind Over Mutant as it is Mutants: Mind Over Crash.

The graphics are surprisingly good. All the character models look fine, and while the environments are sometimes sparse, they never look ugly.

The music is neither memorable nor annoying. I did notice a lot of repeated sounds from previous Radical Entertainment games. The pick-up jingle is directly from The Simpsons Hit and Run.

The controls actually echo Super Mario Galaxy, And that is a good thing. While sometimes the wily bandicoot gets out of control, the controls are pretty tight and are intuitive.

The game starts off fun to play and then just repeats a lot. There's not much evolution in the gameplay, and a lot of the length comes from backtracking.

There are some small unlockables (art books, different skins) but there's really not much in the game past the main adventure. The co-op can add some fun, but camera control issues plague it.

Crash: Mind Over Mutant is a fun little platformer that has some crippling problems. The game hearkens back to the 3D platformers of yesteryear but seems to have learned none of the lessons of the earlier games. 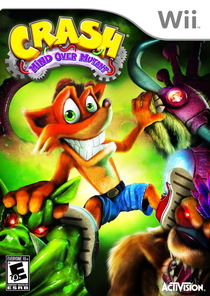