So it's Friday night, and you kick things off by heading out to your favorite generic restaurant. You know—the one with flair. You and your buddies want an appetizer, but you can't agree on which one, so you wind up ordering the sampler platter. Sure, you don't get as much of what you really wanted, and you'd rather not touch those jalapeno poppers. But it's a good compromise and a reasonable (though not great) deal, making it a popular choice.

This pretty much describes Kirby Super Star. If you've ever enjoyed a Kirby platformer you'll find something to like, but you'll wish there were more of it.

Super Star is chopped into several small games, which on average are two to three times as large as the original Kirby's Dream Land. If that sounds short, it is. But in aggregate, these games amount to a title that will take roughly as long to complete as Kirby 64 or Canvas Curse.

Only this title has far more variety. While most of its games share the same controls and special abilities, each has its own twist. Revenge of Meta Knight focuses on fast-paced action and theatrics. In contrast, The Great Cave Offensive encourages slower-paced exploration for treasure, and is generally considered the precursor to Kirby and the Amazing Mirror. Ultra's new games unfortunately miss the whole point, rehashing the original games instead of introducing new modes of play. Sometimes the game falls short of its potential: Milky Way Wishes asks players to hunt for and accrue abilities, but its level design never requires the player to leverage a specific power in order to succeed (while The Great Cave Offensive does). Even so, this game is far better than Squeak Squad or the unpopular maze portion of Super Smash Bros. Brawl's adventure mode.

A good deal of Super Star's lasting appeal comes from its extensive list of abilities. In most Kirby games, power-ups are largely regulated to one—possibly two—moves. In Super Star, each ability features at least three moves, and several have over half-a-dozen. The powers are distinct and practical, making them fun to use in different scenarios. Nintendo fans will also appreciate this SNES classic's clever allusions to other franchises: sword-wielding Kirby shoots beams when his health meter is full. Subsequent Kirby games merely kept Link's hat.

I would be remiss to ignore Super Star's multiplayer. Despite what NOA told NWR at E3 2008, Ultra does retain the popular two-player cooperative option, although two copies of the game are required to truly enjoy it. The introductory game, Spring Breeze, can be played with only one card, but player two must look at player one's DS to see the action. While this mode sounds a tad uncomfortable, I question why it is relegated to the introductory game. That said, Super Star is a blast with a friend, so check out co-op out if you have the means.

Kirby Super Star isn't the pinnacle of gaming some remember it to be, but it's still a clever, approachable, and entertaining game. The instruction manual describes it as a "games omnibus", and that's a pretty good way to put it. There's something for everyone.

Super Star was already a very good-looking SNES title; this remake cleans up some of the original's rougher spots and adds subtle new details. As with other recent Kirby handheld entries, the background animation is notably limited. Brand new FMV cut-scenes are sprinkled throughout the title, but they are noticeably compressed and have unflattering black borders on both screens.

Super Star arguably has the best soundtrack of any Kirby game. Sadly, Ultra struggles to reproduce the SNES version's rich instrumentation, resulting in a less nuanced, stiffer rendition of the soundtrack. Still, most of the memorable tunes retain their charm.

Super Star puts pretty much every other Kirby game to shame with its crap-load of moves for each ability. Thankfully, the pause screen provides a quick reference sheet. Some of the more satisfying power-ups are so crammed with moves that it can be difficult to pull off what you want, but this challenge is largely by design.

Although there are some missed opportunities, level design is above-average for the series. And excluding the disappointing new content, each Super Star game has its own personality. Other Kirby games should strive to equal Super Star's deep and vast assortment of special abilities.

If you strive for completion, the title will last about ten hours, give or take. Revisiting Super Star for two-player cooperative play is highly recommended (although it requires two copies) and some of the obligatory competitive mini-games are also decent.

This remake isn't nearly the best value on the DS, but its variety in both level design and special abilities makes it endearing. Kirby Super Star remains a benchmark for the series, so if you never played it on the SNES, this may be worth your while.

Good review.
I was really excited for the new modes but then I realized one of them was where you just played as Meta Knight throughout the entire game that you just played. Although that might be fun when I feel like replaying the game...I guess.

Yeah, there's a similar mode in Kirby: Nightmare in Dreamland. It's not that the mode is a bad idea--it's good if you want to revisit the game, and the time attack aspect is appealing to some.  I just wish the new modes were more than a second quest for Spring Breeze, time attack, and TWO more boss battle medleys. (Mind you, I suck at The Arena, the only hard part of the game, and haven't completed the first one yet.)

This review is spot on.  You even gave the game the same overall score I did for the game, an 8.

As it says, it's the best Kirby game, hands down, but there's not enough of it.  It's miles ahead of the more recent games, with, perhaps the exception of Canvas Curse, depending on what you like in gameplay.  Each ability is much more unique and diverse than what you might see in other games, and for some reason, sadly, developers never seem to be able to duplicate the diversity and complexity of these abilities.

The game itself is an 8.0.  The "remake" aspect is weak, and is certainly not worth the delay it took Nintendo to release it..  Cutscenes are now in 3D, rather than 2D, which is arguably better, but only marginally so.  The new modes are rehashed of everything that was there, only with altered bosses, and only to a small extent.  If you own the original, you're not missing much by skipping this.  If you want a portable version of the original, buy it, it's every bit as good, but if you just want more of KSS, this game isn't satisfying enough.

I'd actually prefer 2D cutscenes. Not because I'm any kind of purist, but the 3-D cutscenes look so different from the gameplay that they feel virtually unrelated.

I was really looking forward to this game, but I don't have time or money to play it right now.  It's the kind of thing I'll grab the day before a flight home.

I noticed the box art doesn't have a mean-faced Kirby.  Isn't that the first time in years that's happened?

Hmmm...you're right. The last one I can think with a happy Kirby is Kirby 64. 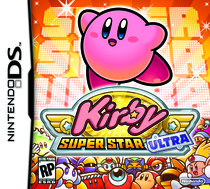