Administer high school beatings all over again in the most realistic way ever!

I don't have much experience with the free-roaming style of game that Rockstar is best known for. I've never played any of the 3D Grand Theft Auto games, so I was excited to get my hands on Bully: Scholarship Edition for Wii.

While Bully has a lot in common with the GTA franchise, it is much less ambitious in scale. In it you play Jimmy Hopkins, a troubled teenage boy who has been kicked out of every school in which he’s ever been enrolled. Sent away to Bullworth Academy, the toughest school around, Jimmy is forced to put his troublemaking skills to good use in order to survive. In a quest to bring order to the chaotic school, Jimmy completes various missions to bring Bullworth's cliques to heel. The game takes place entirely within the confines of Bullworth Academy and its surrounding neighborhoods, as opposed to the sprawling cityscapes of the later GTA titles.

From a story-telling standpoint this restricted perspective has a distinct advantage, allowing each background character to be given a unique personality. The game's "respect" system, in which each clique's attitude towards Jimmy is shaped by the missions he has completed, gives each character the grounds to display their full range of emotion. The ability to interact with characters, and watch them interact with each other, is one of Bully’s simple pleasures.

The overall story is predicatably, and fittingly, juvenile. It does provide some twists in an attempt to the throw a curve ball at the player, but there’s nothing that’s too out there. It isn't a narrative masterpiece by any stretch, but it works well enough; however, the dialog and event writing is top notch. It’s clever in a “high school” sort of way, and the situations Jimmy finds himself in are both amusing and fittingly immature.

The gameplay primarily involves moving from point to point to complete tasks and mini-games. Missions come in the form of odd jobs, story events, and even classes (Jimmy is in school, after all). Most of the odd jobs (missions given to you by NPCs) come down to simple fetch quests or brawls with NPCs. The story events are where the game shows most of its diversity, but most of them still end up settled with a swing of the right and a jab with the left. Classes take the form of simple mini-games that usually don't relate much to the storyline (e.g. how does a glorified version JezzBall relate to art class?). Other mini-games include bike races, go-karting, and assorted arcade games.

Most of these events provide Jimmy with trinkets to commemorate his victories. If you love collecting things you'll love Bully. Trophies, posters, and …panties all adorn Jimmy's dorm room. There’s plenty of things to earn if you're into that.

Bully’s controls use the Wii Remote and Nunchuk to mixed effect. When going from place to place the controls work well enough; movement is controlled with the analog stick, and you run with the A button. Having to hammer the A button to pedal your bike or push your skateboard is annoying, but it’s a non-issue once you buy a scooter or unlock a go-kart.

Fighting is handled by mapping Jimmy's fists to the Wii Remote and the Nunchuck. While it does work, it can prove to be tiring. Long fights can feel like a chore, and the combos (which were clearly designed to be done via button-taps) can be difficult to execute. Sure, it’s visceral when I punch with the Nunchuk and see Jimmy jab on-screen, but it’s overkill to have it as the game’s primary fighting technique.

Much of the gameplay comes in the form of mini-games, and a few new ones are added for the Wii. Some mini-games retain their PS2 controls, using the Analog Stick and buttons instead of the Wii Remote's motion sensor and pointer, while other have been converted to Wii controls. The mini-games control well overall, but the Wii controls work better in some than others.

Bully is a lot of fun, and you’ll often find yourself trying “just one more mission." And there are a lot of missions; I beat the game with 55 completed missions and an 84% completion percentage. While many of the missions are similar there is still a lot of variety. However, the game is much more linear than its GTA cousins. Often times all there is to do is either deliver newspapers or complete a single story mission. Sometimes there simply are no missions to complete, and you have to wait until the next day to do anything but explore. That said, Bully does feature a living world (it even changes with the time of day) that can be a lot of fun to explore aimlessly.

The biggest problem with Bully is its graphics. To put it succinctly, they are poor. On the PS2 Bully was not a graphically top-tier title; it used the aging GTA III engine and sported strange character models, bland textures, and a fair amount of pop-up. The Wii port has received little in the way of graphical upgrades. It sports the same bland textures and messed-up character faces, although draw distance is improved and a new character shadow system gives Jimmy a realistic shadow. Also added is the ability to play the game in 16:9, which is a nice addition.

Despite these modest improvements, the Wii version also introduces a series of graphical glitches. While not exceedingly common, you should expect to see at least a couple of the more noticeable ones every half-hour or so. I thought the invisible school bus was a weird glitch until I saw the translucent school bus; I've seen cars lose their shadow simply because the driver’s door closed; I've seen one NPC clip through another. But the most severe glitch occurred when a townie tried to steal a bike from a student. He flipped the student from the bike, at which point the child hovered in the air (as if he were riding another invisible bike) and the townie disappeared as the bike rode itself off. While not game-breaking by any means, these glitches detract from gameplay and give the game a certain lack of polish.

Bully’s sound is actually quite good. There’s a wide variety of music and it always seems appropriate for the situation at hand. Ride a bike at night, you hear one song; ride a bike during the day and you’ll hear another. However, voice acting is where Bully really shines. Each character has their own lines, and they are well-delivered by skilled voice actors. Some of the dialog is cheesy, but the sheer amount of dialog is impressive. The sound effects are good enough, but are overshadowed by the quality of the voice acting and music.

The biggest addition to the Scholarship Edition is its multiplayer mode. The in-class portions of the game are featured in a two-player split-screen mode, with players competing to have the highest score at the end of the game. It's not exactly the most exciting multiplayer option, but it’s a nice bonus.

Bully: Scholarship Edition is a good game that features fun gameplay, an entertaining story, an interesting gameplay environment, and plenty of places to explore. You’ll enjoy it if you like exploring a world that feels alive. Its greatest flaw is its sub-par graphics. If you're a fan of the Grand Theft Auto series and didn't play Bully on the PS2, the Scholarship Edition is worth a shot; however, if you've already played Bully there simply isn't enough new material here to make it worth your time or money.

It's a mix of good and bad. Fighting is fun for a while, but becomes a chore. Some mini-games feature great control while others don't come across as well. That said, the controls almost never get in the way.

Bully: Scholarship Edition is fun. It was a rare moment when I felt I didn't really have anything to do, and there was almost always something I was looking forward to. Sometimes it was just fun to walk around and experience the game world.

There’s a ton of things to do in Bully: Scholarship Edition, with over sixty events to play and endless trinkets to collect, buy, or win. Even when there are no objectives to complete there is somewhere to go in order to have some fun. All the completists out there will have to invest at least thirty hours to get everything.

My initial reaction to Bully: Scholarship Edition was tepid, but it eventually won me over. It is a complete experience - it has characters that are fun to interact with, a moving storyline, and a great game world. It also has good controls, enjoyable gameplay, and lots of things to collect. With some more polish this game could have been a top-tier Wii title; as it stands, it's still a great title for those who haven’t already played Bully on the PS2.

Administer high school beatings all over again in the most realistic way ever!

Somehow I doubt the average NWR reader was on the administration end of many beatings.

They actually said there were some added textures and what not to the Wii/360 version. To bad about the graphics.

They might have added some texture work, but by and large most things are flat.

Just so everyone knows the 360 version also suffers from bugs and glitches. So its really Rockstar's fault and not the Wii's.

Just so everyone knows the 360 version also suffers from bugs and glitches. So its really Rockstar's fault and not the Wii's.

Actually I heard it is actually the why's fault that both versions are screwed up.  The why basically caused the problem when the game was in development.  Some sort of T-Virus explosion or something.

The 360 version, while not "next-generation" visually still looks good, and has a better framerate. So far I'm happy with the 360 visuals.

I hope Rockstar makes another game like Bully: something more innocent than GTA but still not exactly angelic for the Wii.

Something to compliment GTA4 on the other systems.  I feel pretty confidant that it would be a really good game if it were built FOR the Wii.  I think that it could sell well too.

You just described the GTA series and pretty much every other game Rockstar has put out! ;)

Just gotta say I FINALLY picked this one up (only 15 used at Blockbuster now), and I'm really digging it!  It reminds me of Rushmore here and there and thats ALWAYS a good thing!

I totally agree that it would be very interesting to see Rockstar create new IP's with similarities to GTA yet still their own creation.  And at this point in time, with the millions of new Wii's out there, it could certainly do quite well.

Bully is one the games that really surprised me this year. loved the game, it owns Scarface and is just as good as Godfather, if not better.

Bully is one the games that really surprised me this year. loved the game, it owns Scarface and is just as good as Godfather, if not better.

Well I think it can coexist with them, it tries to do things a bit different from other sand box games.

Oh I know. But comparisons are un-avoidable. They never end.

We compare men and women still don't we? ;)

I'm with DAaaMan; Bully was a big surprise for this year as well. One of the best games I played. I would totally recommend it. 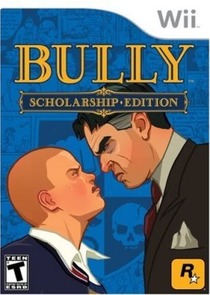