Now in its fourth year of existence, the DS has slowly accrued some pretty decent racing games. On top of the pile is, of course, the venerable Mario Kart DS. Race Driver: Create & Race is no slouch either. After those two, the list quickly drops in quality to average-yet-entertaining games like Need for Speed ProStreet. MX vs. ATV Untamed probably fits somewhere in the lower half of this category. It's functional and even fun for a few hours, but ultimately, it still feels shallow and incomplete (especially compared to its console brethren).

The core racing experience on which the game is built is pretty compelling. Speeding through a series of indoor tracks on either a bike or an ATV is as close to a visceral thrill as possible on the tiny screens of the DS. Vehicles and riders animate well and react appropriately to the shifting terrain of various hills and bumps. There is a certain rhythm to the changing topography, and after a few laps, you'll be timing jumps and sticking landings like a pro. The lack of analog steering has been the downfall of many a racer, but Untamed side-steps that hurdle thanks to a healthy amount of sensitivity and some well designed tracks. It isn't necessarily realistic, but it is fun. The problem is that there isn't much else to do. Players progress through a series of tournaments and stunt challenges, all of which take place over the same basic indoor tracks. There are only four racers competing at once, and only eight total in the game (four MX, four ATV). So, you can see almost everything the game has to offer in one sitting. There are multiple difficulty settings, but that's about it in terms of variety. Even though the core gameplay works, it is surrounded by a game that could best be described as a skeletal work-in-progress. Developer Endgame Studios, making their first attempt at a DS version of the franchise, must have run out of time before being able to put any character or finishing touches into the game. It lacks the polish and personality that fuel the console versions of MX vs. ATV. Those versions of the franchise have had more years of development and refinement, though, so a certain amount of roughness in the DS iteration can be forgiven.

The multiplayer options are similarly sparse; it only supports multi-card, local wireless play for four people. No single-card or online play means that enjoying MX vs. ATV with friends requires a significant investment. Luckily, the entire game is playable in multiplayer, so at least you can get your money's worth out of the deal. Maybe not your full money's worth, as this game is overpriced as anything other than a used budget title, but some of your money nonetheless.

The question I keep coming back to is, what is the target audience for MX vs. ATV Untamed? It's not regular gamers; the bare-bones setup and options suggest a no-frills experience geared towards somebody already in love with this kind of racing. And yet the target audience can't be serious racing aficionados either; the gameplay is decidedly arcade-style, limited in its scope, and only marginally realistic in its representation of the sport. So we're left with a game stranded somewhere in between, satisfying neither group. It's an arcade racer without any of the over-the-top personality that makes arcade racers so fun. That might have been enough ten years ago on the N64, but games (and expectations) have evolved since then.

There are some promising elements to MX vs. ATV. Graded on the "it's only a DS game" scale, it's not a bad effort. But where is the track editor? Where is the online play? Why is the main single-player game so repetitive and soulless? Are we supposed to pretend like it isn't 2008? Gamers expect and deserve more. With any luck, the inevitable sequel will bring more game to the table and capitalize on the strengths of its predecessor.

It might be rudimentary and bland, but what is there looks good and moves smoothly. Driver animations are particularly well done.

Both sound and music are annoying and unremarkable, with the notable exception of engine noises, which are still annoying but awesome at the same time.

In any driving game, the lack of analog steering is a liability. MX vs. ATV makes the best of it with sensitivity and a "feel" all its own. For the most part, it succeeds.

The mechanics of driving the vehicles and navigating the courses are well done. Unfortunately, there isn't anything more to the game than that. With little motivation to dig deeper, the gameplay quickly stagnates.

Local, multi-card multiplayer provides a temporary relief from all that stagnation, but it's not fleshed out enough to make the game feel fulfilling. Including ample time spent exploring the multiplayer component and finding the handful of meaningless unlockables, this game probably won't hold your attention for more than five hours or so.

MX vs. ATV is a decent first effort from Endgame Studios. The core gameplay is there; it just needs to be fleshed out and supplemented by all the modes and extras that gamers have come to expect from modern racing games. In its current incarnation, MX vs. ATV feels like little more than a thoroughly entertaining demo. 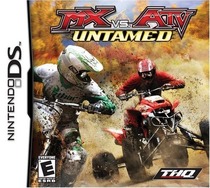