Nintendo’s latest fitness experience promises to make working out a ton of fun.

Each copy of Ring Fit Adventure comes with two things, a flexible plastic ring called the Ring-Con, and a leg strap. After placing a Joy-Con into each of the included items, you can go ahead and wrap the leg strap around your left quad (I’m fairly confident it needs to be attached to your left leg). Pick up the Ring-Con, and now you’re ready to both exercise and play.

Whether it’s playing bongos to make Donkey Kong run and punch or dodging soccer balls by leaning on the Wii Balance Board, Nintendo has often excelled at creating fun control schemes using off-the-wall peripherals. The Ring-Con is another very unique way of controlling the action on-screen, and it’s both super intuitive and, depending on the activity, super tiring. The first activity I got to try was the Pectoralis Major Challenge. I held the Ring-Con in front of me like a steering wheel and my goal was to perform as many ring presses as possible in a short period of time. The Ring-Con displayed both it’s flexibility and durability when I attempted this challenge. Squeezing the Ring-Con was easy at first, but after pressing the ring inwards over fifty times, my muscles began to ache and I couldn’t keep my pace up. I managed to perform 96 ring presses and that result showed up on the in-game leaderboard. You can compare certain results and leaderboards with others in your household who are playing on the same Switch. In addition, those who pay for Nintendo Switch Online can compare their scores with their internet friends.

The second activity I tried was called Robo Wrecker, a whack-a-mole type mini-game. Once again, I held the Ring-Con like a steering wheel, but this time I needed to either press in on the ring or pull on the sides to squish the moles popping up. It’s necessary to spin the wheel to have the spring-loaded smashing devices line up with the moles. Like any good game of whack-a-mole, you really need to pay attention if you want to knock out a high number of the critters. The constant stretching and squeezing also does a number on your arms and will make it nigh impossible to catch every mole.

While there’s a variety of individual activities to try, the most exciting part of the game is the main adventure mode. In this mode, you play as a young woman who must use different exercises to traverse the land and defeat enemies. Unlike regular RPGs, the player’s attacks consist of a wide selection of exercises. Some of the exercises included are thigh press, knee lift, bow pull, and overhead arm twist. Similar to Wii Fit (and many other Wii games), the game constantly instructs you on the proper way to perform each exercise/attack. You actually perform a stronger attack when you use the proper form and motions to execute the exercises. Defeating enemies helps you level up and earn in-game currency to spend on new workout clothes and smoothies, which can provide stat upgrades or restore your health. In total, there’s over 40 exercises/skills that you can unlock. Along with the battles,the simple act of traversing each level is a lot of fun. If you run faster in real life, your female avatar’s hair will catch fire and she’ll speed up. You’ll need to perform many different motions to traverse the world’s many obstacles.

Ring Fit Adventure is also extremely customizable. When starting a new adventure session, you have the option of lowering or increasing the game’s difficulty. The game also features a custom mode where you can build out different fitness lists of your favorite exercises. I was told that you can probably complete the adventure mode in about two months if you play one hour each day. Knowing Nintendo, there will likely be multiple incentives to jump back in after your first Adventure, in addition to just wanting to get a good sweat on.

I should also mention the game’s achievement-like system, which comes in the form of new titles. It was unclear if you’ll be given specific instructions on how to unlock the titles, but hopefully you’ll know what’s necessary to unlock titles like “Runner with a Dream!” One other nifty feature is that by placing your finger over the Joy-Con’s IR sensor, you can see what your current heart rate is.

My short time with Ring Fit Adventure was really enjoyable. Making exercise fun is no easy task, but it seems like Nintendo has crafted an addictive and unique way to get fit. 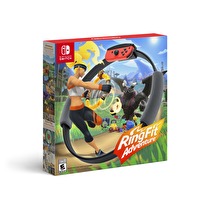