Lufia: The Ruins of Lore

A new adventure awaits for Lufia Fans on the GBA!

The Lufia series is often the least mentioned franchise when it comes to mainstream RPGs. Though games have gained a faithful following, it was a relief when Atlus announced they would bring over the fourth iteration to English speaking gamers.

The game is a side story in the Sinistral saga, and revolves around a young priestess by the name of Rubius. She meets a trio of treasure hunters and is in search of Ancient Stones that are said to hold the powers of a mighty Beast. There is evil afoot as the ruthless Ragule, a wanderer, has seized control of the military kingdom of Gratze. According to rumor, there is nothing he will not do to gain the Beast’s power and allow him to rule over all humanity with it.

Does the Beast have a connection with the nefarious Sinistrals that the Legendary Hero Maxim and his party destroyed?

The gameplay can be described as a combination of the Dragon Warrior class system and Lufia II’s overworld adventuring. Outside of battle, characters can use items to solve puzzles and gain access to areas they would normally be unable to. For instance, using the Whip, your party will be able to cross a gap. Fire arrows to temporarily stun enemies before they can attack you. From all accounts, the game uses these concepts far more intricately than Lufia II did, and has this gamer slavering for more.

The entirely new class system has eleven distinctly different jobs. Some of them include: Thief, Swordsman, Mages, Martial Artists and more. Much like with Dragon Warrior, you gain experiences and learn spells and special techniques that can be used in battle thereafter.

Monster raising appears to be another element that has carried over from Lufia II. In the previous game, you were able to raise your creature by feeding it equipment and it would grow and morph with choice pieces of equipment. Evidently characters can now “fuse” with their chosen pet to create even more devastating attacks.

One of the most popular ‘quests’ to complete in Lufia II had to be the Ancient Cave. It was a maze of an astounding one hundred floors that were randomly generated. Players were sent in naked and at the meager level of one and had to fight their way into the dark depths. This fun and challenging aspect has also made a comeback, much to our delight. In addition to this, players can link up four GBAs and play cooperatively through the Ancient Cave! Monster trading is another multiplayer option and will probably see quite a bit of use as players bargain for a favorite.

Lufia games have always had endearing characters, memorable plots, and most importantly: engaging gameplay. The Ruins of Lore looks to not only meet that legendary description, but also surpass it. March cannot come soon enough. 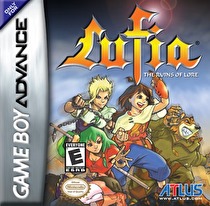