A light week to round out the year.

So here's a bit of inside baseball: The core of the downloads article is actually written on Wednesday night, because we get the downloads from Europe on Monday and Nintendo of America usually updates the website during the day Wednesday. Normally this works, but when Nintendo's on a holiday break... Read more...

Watch out for low-flying piranha.

The next Splatoon map releases tonight, and it's going down quite deep.

The Piranha Pit will release at the traditional update time this evening, and is a stage with a lot of mining conveyors that can change the flow of battle and provide height advantages. The mine is in a lake, so players will need to watch their step lest that first step cause an unforced errror.

Includes the first directly wired controller for the Wii U. 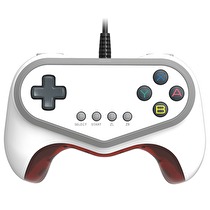 Pokkén Tournament will have local play in its Wii U incarnation, but one player will be fighting alongside their Pokémon on the GamePad.

In an announcement of the special wired controller for Pokkén Tournament, HORII confirmed the game will support 2 player versus play, but only one of the controllers... Read more...

And the price will certainly be right for them.

The anniversary release of Pokémon Red, Green, Blue and Yellow in Japan will have several promotions, including exclusive new hardware.

Special bundles of the 2DS preloaded with the various versions of Pokémon and with matching colors will release in Japan on February 27, the same day the games... Read more...

Time to get one last airing of grievances in before Festivus.

As we first reported yesterday, Super Mario Galaxy is the main - in fact, the only new game this week for North America. The actual best Nintendo console game of the 2000s brings grand adventure, tricky platforming and the best princess in the Nintendo lineup, so be sure to pick it up.

The next Splatoon weapon update will arrive to splat kids over an open fire.

The Rapid Blaster Pro Deco will arrive at the traditional update time, and will add a touch of class to one of the game's longest range weapons. The quick fire rate and long range is balanced by a slightly lower power.

We've got space, castles and marshmallows that throw lightning.

Although tomorrow's Wii U downloads will be light, but there will be plenty of jumping plumbers.

Nintendo's North American website has updated to show Super Mario Galaxy - the original Wii title - will come to the Wii U eShop as a download tomorrow for the standard downloadable Wii price ($19.99... Read more...

by Donald Theriault - 4:03 am EST
Discuss in talkback!

Some quick news bits as things wind down for the holidays:

The Super Mario Maker 1.3 update went live on Tuesday morning, bringing the new elements and world records previously promised to the game. The web portal also went live and can be accessed at supermariomakerbookmark.nintendo.net for all your... Read more...

The new games going on sale are as follows:

The closest we'll ever get to playing as the great, mighty Poo.

A couple of new items will be dropping this weekend, one just in time for a great battle and the other to coincide with a recent Japanese Virtual Console release.

Splatoon will get another addition to the combat roster tonight at 9 p.m. Eastern as the Tri-Slosher Nouveau will be available at Sheldon's. The Slosher variation has a Seeker sub-weapon and the Echolocator as a special.

And they celebrate with a Squid Sisters concert.

Splatoon continues to set sales records in Japan, and Nintendo's throwing a giant party to celebrate.

NCL has announced the title has crossed one million copies sold since tht title's launch on May 28 in Japan. The last MediaCreate figures have the title at apprxoimately 915,000 disc sales, meaning... Read more...

You're a platformer now, you're a shooter now.

The next major update to Super Mario Maker will bring the promised web portal and a few new creation tools.

Launching Monday evening in North America, the update will add Super Mario Maker Bookmark, the online service that allows for searching and tagging of levels. The courses added on Bookmark will go to a special tab in Course World. The update will also show the first person to clear a course, as well as the fastest clear.

The one with the giant blocky elephant in the room.

Well, it finally happened; after six years of development, four years of console releases and a multi-billion dollar buyout by a console competitor, Minecraft is FINALLY hitting the Wii U. Our leading authority on all things Steve Andy Goergen has written a buyer’s guide on the subject, and his review will come soon.

Plus results from the last European Splatfest.

Some news and notes from the world of Splatoon:

An update will release tomorrow night to bring the game to version 2.4. According to the patch notes provided by Nintendo, the key features will be improvements to level matching and removal of several exploits. Rainmaker mode has also seen several changes,... Read more...

A fitting climax to a year of insane additions.

Cloud will be available later today, and was the most demanded Final Fantasy character. He'll feature costumes from the original Final Fantasy 7 and... Read more...

We also get another look at Dark Mewtwo. 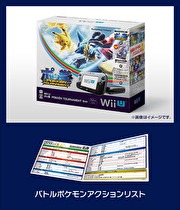 Pokkén Tournament’s Japanese website has been updated to include a Japan exclusive Wii U bundle. The bundle comes with a black 32 GB Wii U system, a copy of Pokkén Tournament, a special booklet, and a Dark Mewtwo amiibo card. The game and the bundle release on March 18th, 2016, with the bundle going for 36,000 yen.

November's US sales had a few surprises and some disappointments for Nintendo systems and games.

In terms of hardware, the Wii U sold at about a similar level to the same time last year with Super Smash Bros, selling approximately 240,000 consoles in November largely due to the Smash Splat bundle.... Read more...

This week's Nintendo downloads in Europe have feature a massive sale in anticipation of the holiday season.

Beginning with the eShop update on Thursday, multiple 3rd parties will have their games on sale, with some deals over 50% off. The full list is below, sorted by publisher with end dates in italics:

by Donald Theriault - 7:11 am EST
Discuss in talkback! Source: Nintendo

Probably girding the eShop for Steve.

Another major Nintendo maintenance will be going on this evening.

The maintenance will begin at 5:00 p.m. Pacific time (8 p.m. Eastern) and is slated to run for approximately 10 hours (until 3 a.m. Pacific/6 a.m. Eastern). "Certain network services" will be affected.

It isn't clear why the maintenance is taking place at the time it is - it's slated for working hours in Japan, and most maintenance sessions are about 12-24 hours later.

After defeating the likes of Ifrit, Bahamut, and series newbie Amateratsu, players can summon them in battle.

Get ready to fight to Bahamut and Shiva in Final Fantasy Explorers and then, when they're defeated, have them join your party as powerful summons. In total, 12 summons, or "eidolon guardians," are featured in the game, including two (Amateratsu and Dryad) that are brand new to the series. See below for the full list: