Yesterday was a good day if you’re a collector. 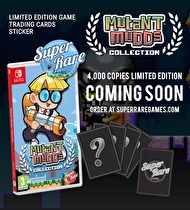 On Twitter yesterday, Super Rare Games announced multiple indie titles that they will be releasing physical copies for. Though no set dates were included, the following games are set for physical copies:

As of right now, the only newly announced game available to order is Lovers In A Dangerous Spacetime over at Super Rare Games, with other pre-orders hopefully arriving soon. It’s fair to say that if you enjoy collecting physical copies of indie games, now would be a good time to start building up that savings account.

I'll take two of each!

I take it these guys are competitors of Limited Run games?