Our long international nightmare is over. 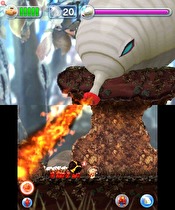 The theory that everything got out of the way of Splatoon 2 last week is definitely confirmed by this week's Switch lineup, which runs another six games deep. And there's a lot of multiplayer fun to be had with Namco Museum (including Pac-Man Vs. for the platonic ideal of Gamecube->GBA connectivity) and Overcooked making the jump. A retail game - Fate/EXTELLA - is also in the mix, though if you have no background in the series looking up the plot summary of PSP game Fate/EXTRA at minimum is required. Otherwise, just know that it's (Highlander x anime) + Dynasty Warriors.

The platonic ideal of dual screen gaming comes out this week with the New 2DSXL in North America, so there's a couple of retail games to go along with it in Hey! Pikmin and Miitopia. You can read Perry's review for Hey! Pikmin, but Miitopia's will hit later on. (Fans of the 2016 GOTY, Metroid Prime: Federation Force, this will feel familiar except I doubt Miitopia is that good.) The retro love continues with Super Sidekicks from the Arcade Archives and three TG-16 games as Konami doesn't know how to quit the Wii U yet. One of them is a very infamous Retroactive title, appropriate given last week's Retroactive announcement.

Europe has a similarly full lineup for the Switch, though since they got Fate last week there was a late substitution for a children's card game. Also, the New 2DS launch duo is actually a trio in Europe, as we have to find a new running gag to substitute for Dr. Kawashima's Devilish Brain Training. Between Splatoon 2 being on half the Switch systems in the country (only half?) and Dragon Quest XI on 3DS this week the Switch pickings are slim for Japan, but it does give an excuse to mention that Graceful Explosion Machine did get an update.

Highlights: Mighty No 9 is on sale until August 2.

StreetPass Mii Plaza games are on sale until 10 August.

Capcom titles are on sale until 10 August.

Midnight 2 is on sale until 17 August.

CIRCLE titles are on sale until 17 August.

Lightwood Games titles are on sale until 10 August.

Gamelion titles are on sale until 10 August.

edit: When we can we expect a review of Super Sidekicks from Insanolord? He is my source for all things soccer related.

Devilish Brain Training is finally out!