This week's article is best viewed in tate mode. 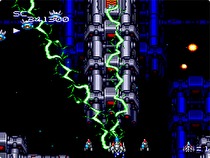 There's a lot of shooting in them thar eShops this week, mostly of the scrolling variety. Although North America and Europe get LEGO City Undercover, after that it's bullets everywhere. The big eShop release of the week, for instance, is Graceful Explosion Machine, one of the early entries from the late February indie showcase.

In other shooter news from the retro department, the Arcade Archives release this week is Alpha Mission II from the Neo-Geo, while even the Wii U gets in on the fun with beloved TG-16 title Super Star Soldier on VC (along with the eternally Japanese-named sports title World Sports Competition). Also, North Americans should watch out as noted 2/10 Vroom in the Night Sky is finally going to show its face.

Europe had a week delay on Has-Been Heroes, but the biggest release (at least based on sales potential) is the late European release of Yo-Kai Watch 2. The first one did gangbusters in Europe, so let's see how they fare at avoiding Todal Dude.

My Nintendo members get 30% off Fire Emblem games on 3DS and Wii U, Fire Emblem Awakening/Fates DLC and themes are 30% off for all until 20 April.

Tom Create titles are on sale until 27 April.

STARSIGN titles are on sale until 27 April.

Joindots titles are on sale until 20 April.

RCMADIAX titles are on sale until 4 May.