Yo-Kai Watch 2: Bony Spirits Is the Yo-kai Watch Sequel We All Needed

HANDS-ON: Oh, I get it. Because Jibanyan is a cat and Pikachu is a mouse....

Nintendo’s lineup alone is worth several hundred hours of time....

This is what it’s like when pinball, ghosts, battles, and Mega Man all collide....

An alias is the most liberating thing. It frees you from your old sins, disassociates you from new ones, and lets you register for a Maestro card....


THE FAMICAST: Episode 82 - TIME TO SHRINE

Hyrule Warriors, some talk about the New Nintendo 3DS and even a bit about Japanese baseball on the show this month!... 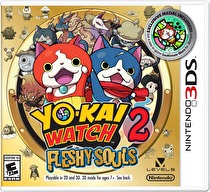