The New Mario game takes Mario out of the Mushroom Kingdom into a variety of different worlds with some new hat-powered tricks.

Super Mario Odyssey will be coming to the Nintendo Switch Holiday 2017.

In what looks to be the next entry in Nintendo's hallmark franchise, Super Mario Odyssey looks to be taking Mario out of the Mushroom Kingdom and into a variety of different worlds. The footage Nintendo showed off revealed Mario in a realistically-styled cityscape (one of the billboards glimpsed read "New Donk City") with regularly-proportioned NPC characters walking around. However, they showed glimpses of other worlds, like a Western-themed desert town with characters resembling skeletons, a colorful land with utensil-people, and a majestic forest of trees that Mario would get to explore. Nintendo made a point to claim this was the first time since Super Mario Sunshine that they had returned to trying to create large open-world levels for players to explore. 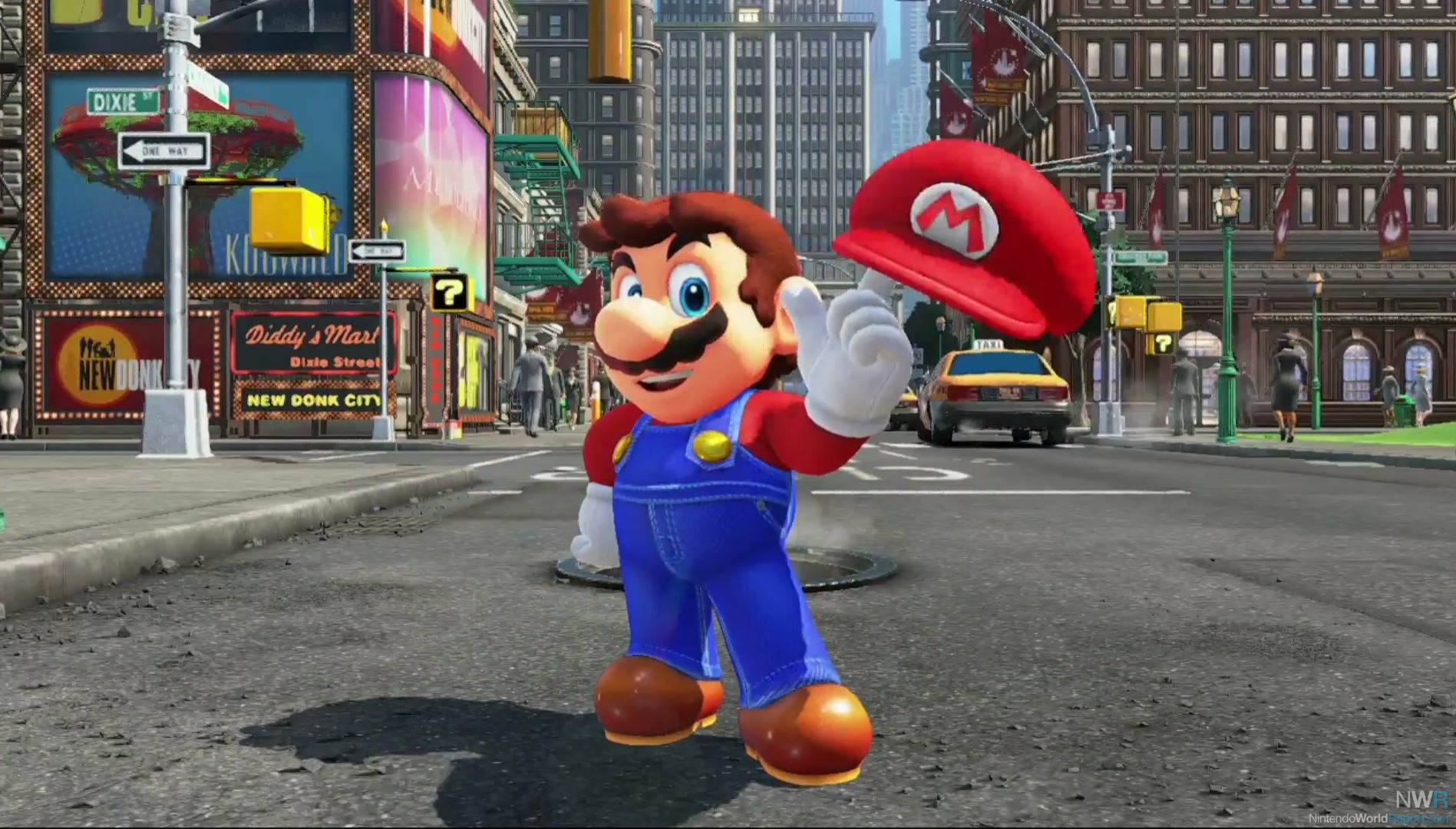 Nintendo also showed off signature Mario moves, from the triple jump to wall jumping, as well as hanging off ledges and climbing up beanstalks. One new move they showed was Mario throwing his cap out ahead of him where it would spin in mid-air and act as a platform that Mario could jump to and bounce off of mid-air. At the end of their gameplay reveal, Mario's hat even opened its eyes, suggesting that the iconic clothing would be a character in its own right during the game.

Nintendo also showed glimpses of airships, Bowser in a white Tuxedo, and Princess Peach calling out plaintively for her hero. They also revealed a variety of possible antagonists, each possibly themed to the world that Mario was visiting, one being a giant robotic insect.

As the title was announced for a Holiday 2017 release, Nintendo also stated that the title would not be playable during the event.

This may be my most anticipated Switch title (Zelda and No More Heroes 3 are up there).

This may be my most anticipated Switch title (Zelda and No More Heroes 3 are up there).

Except they have not announced No More Heroes 3, so you are anticipating a game that doesn't exist.

This looks like the kind of Mario game I wanted to see on Wii U, something more ambitious and creative.

They had played the game for few seconds on japanese event:
http://www.youtube.com/watch?v=D4YrHReUh50&t=3h33m16s

Cool that when explaining the history of the series, they divided 3D Mario series into 2: linear and open/hub based, with Galaxy 1/2, 3D Land/World being linear and 64, Sunshine and upcoming Odyssey being open:
http://abload.de/img/linearmario1wsg5.jpg

OH NO! NOT ZELDA TIMELINES! XD

Cool that when explaining the history of the series, they divided 3D Mario series into 2: linear and open/hub based, with Galaxy 1/2, 3D Land/World being linear and 64, Sunshine and upcoming Odyssey being open

I heard that but your post really spelled it out. I'm very intrigued by Odyssey, but when my wife briefly had a Wii, Super Mario Galaxy didn't do it for me. Given its near universal love, I just assumed the genre wasn't really for me. I loved Super Mario Brothers, but it was largely because of what I perceived to be a subversive art design, and that was the only other title I played other than a few rentals of 2 and 3. But maybe the open world style will give it an angle I'll enjoy, so I'm even more likely to give it a try now. I plan on buy Super Mario Land for my 3DS for posterity's sake anyway now that the price has dropped.

The Hero of Donk split the timelines.

While I loved 3D World, I'm really excited about this game, as I'm much more a fan of the 64/Sunshine style of gameplay. It's nice to see that the cap utilization enhances the platformingn but doesn't create too much of a crutch.

Where is IANSANE?!?!?! Has he not seen the stitches on Mario's clothing?! It's finally happened man! The one feature you've pleaded for throughout the ages and it's finally here!