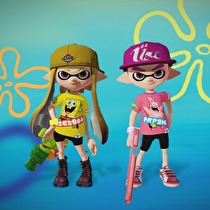 NA/EU/AUS: Patrick 373, Spongebob 327 (43-57, 55-45) At Bluefin Depot, the popularity curse continues for Callie. Spongebob's big popularity advantage required a 49-51 in order to claim the win, but fell by ten points to the super starfish. Patrick players reported a lot of civil wars during the event despite the popularity disadvantage, which may be a feature of the new Splatfest matching rules.

Japan: Tuna Mayo 354, Red Salmon 346 (48-52, 51-49) At Port Mackerel, it was a narrow duel between two different flavors of onigiri (rice ball), but Callie's Tuna Mayo side took a squeaker. With a narrow popularity disadvantage, the Mayo team spread itself into a tight battle victory.

I was winning all my matches ranking first or second player with team Spongebob. Then, the US came online and things really turned around.

"Patrick players reported a lot of civil wars during the event"

What does that mean?

They were matched up against each other.

As in Patrick was on both teams?

"Civil war" in a Splatfest means you're facing members of the same team. They don't count for winning percentage in the overall, but they do give you points toward your rank.