Shuffle up and deal! 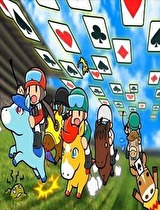 UPDATE April 20: The demo is now live in the North American eShop.

The Grand National may have passed, but Europe's about to get its horse race on soon.

This week's Nintendo download announcement for Europe confirmed that Pocket Card Jockey, the GameFreak developed horse racing / solitaire crossover, will have a demo with this week's eShop update and will release on 5 May.

A North American release has not been announced, though 5/5 would allow for perfect timing with the biggest event on the horse racing calendar in North America, the Kentucky Derby (5/7).