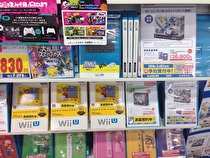 Japanese retail is seeing something perhaps unprecedented: A shortage of Wii U systems.

According to Japanese retail sources, the system's holiday success caused Nintendo to dip into system supply that was earmarked for early 2016, including the highly sought after Splatoon bundle selling out before the Christmas/New Year's stretch. This resulted in three Japanese trackers showing under 4,000 systems sold for the week of February 1 - 7, after selling around 250,000 systems in the last four weeks of December and averaging over 10,000 a week for January.

NWR Japan correspondent Danny Bivens has indicated this may be a longer-than-expected issue: "The shop here said that they're not getting any additional units until the Pokkén set arrives." This would indicate the system wouldn't have wide availability again until March 18.

It's the Wii all over again!

Iwata was right all along!!!!

I'm actually going to be in Tokyo tomorrow actually. If I spot any electronic stores or game shops, I'm going to check them out and see what they say as well.

"NWR Japan correspondent Danny Bivens has indicated this may be a longer-than-expected issue"
Never heard of him.

I guess Nintendo had really low expectations, though in some ways that's a good thing. I believe it's more costly to overproduce than underproduce.

Proof that Sony and Nintendo are secretly working together behind closed doors since the infamous "split" that led to the creation of the original Playstation in the first place. Conspiracy theory formulating...

I ate cheeseburgers and junk food instead of going to game shops in Tokyo. I'd say we just go with what micaelbaysuperfan616 says and call it a day.