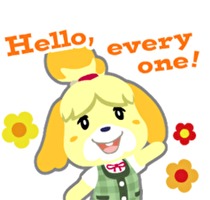 Nintendo and LINE have released a set of Animal Crossing-themed stickers. The popular messaging app allows user to send these stickers, or giant emojis, to each other along with text, pictures, and videos. Isabelle and friends join a huge list of original and licensed characters from across the globe, including Peanuts characters and the cast of Dragon Ball Z. The Animal Crossing sticker set is priced at $1.99 in the US, €1.99 in Europe, and ￥240 in Japan.

LINE is Japan’s biggest social media platform, boasting over 600 million users worldwide. This is Nintendo’s first set of stickers through LINE. No plans have been announced for any future sets.

So begins the sweet, sweet merchandise!


I do wonder what will be next. Hopefully more cute things!

I've never even heard of LINE. Must have sprung up overnight.

Merchandising, merchandising. That's where the money from the movie is made.

I've never even heard of LINE. Must have sprung up overnight.

It's a Japanese instant messaging app that brings in money through selling stickers. If you see the Facebook Messenger having cute images in the chat log, LINE did it earlier.

The app is very popular in Japan and the rest of east Asia, I believe. It doesn't seem to have caught on elsewhere.