The show must go on. UPDATED 12pm EDT Friday 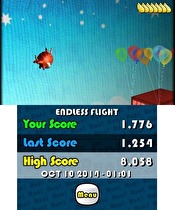 After a very rough week for the Nintendo family, it's nice to be back to near normal with a round of Nintendo downloads. We fully understand if Nintendo has gone radio silent for the downloads, so we're going by the various regional websites even more than usual this week.

Anyway, you're probably shaking in anticipation to find out what the next RFN Retroactive will be, and James's dare that we would play the next VC download has come up with Blaster Master - if you owned it on the Wii, it's upgrade eligible as well. The 3DS has a few animal love games and an air traffic control simulator, plus the return of DSiWare. Again.

And although we don't usually highlight sales in this space unless there's no other choice, 4 Corner Games's Syrenne McNulty (whom you may recall from RFN last week) has dropped the prices of I've Got to Run to a penny on the Wii U, and $.10 on the 3DS, with all proceeds resulting from these sales going to cancer research.

Across the ocean, we know that there's another Wii download on the board with PokePark Wii: Pikachu's Adventure, and the Wii U Virtual Console gets Mario and Luigi: Partners in Time.

Ubisoft will have their Summer Sale beginning Monday at noon ET.

EnjoyUp games are on sale until August 13.

Cypronia titles are on sale until August 31.

Circle Entertainment titles are on sale until August 6.

Bplus titles (Bit Boy!! Arcade and PUZZLEBLOX Setup) are on sale until August 31.

Sense by Play.me (note: Appeared temporarily and was pulled: may not be live as of 1:30pm EDT on 16 July.

Ooooo, the Etrian Odyssey Untold 2 demo.  I tried the demo for Untold 1 and thought it was pretty cool.  Then I went back and tried the one for EO4 and couldn't get into it.  Apparently I need the set storyline and pre-determined party of the Untold games to get into it.  Well, I guess this demo will confirm if that's the case or if Untold 1's demo just caught me in a good mood.  Gotta remember to download it tonight.

Blaster Master--not such a bad outcome for the Retroactive Jr.!

As I recall, Connectivity (may have still been Newscast) did a feature on the Blaster Master Overdrive WiiWare game a while back. Would be an interesting point of comparison.

Another I am an Air Traffic Controller came out??!!

Another I am an Air Traffic Controller came out??!!

Just checked. I have Narita All-Stars. This is Narita with ANA. Might have to buy it to support TechnoBrain.

Great, now I can actually finish Blaster Master/abuse save states.