The exclusive 3DS Persona title gets some limited edition love. 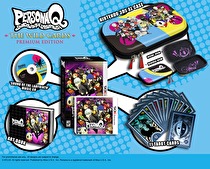 Various editions of Persona Q: Shadow of the Labyrinth are heading to Western markets this fall. Two different versions of the physical version, the normal retail bundle, and "The Wild Cards" Premium Edition, will be available upon release.

Gamers that pre-order or pick up the first run normal retail bundle will receive a special set of tarot cards and special packaging for the game. The premium edition, which will be available in North America, comes with the aforementioned tarot card set as well as a Persona Q art book, soundtrack CD, and a Persona themed 3DS XL hard case that was previously limited to Japan. The normal retail version will sell for $49.99 while the premium set will retail for $79.99.

Persona Q: Shadow of the Labyrinth launched last week in Japan on June 5. The game incorporates the gameplay style from the Etrian Odyssey titles and is exclusive to the 3DS.

Irvine, Calif. -- June 10, 2014 -- Persona® Q: Shadow of the Labyrinth, the first Persona title for the Nintendo 3DS™ handheld system, now has plenty of revealing details on the pre-order bonus items. Persona Q, the first-person dungeon crawler that combines the cast of Persona 3 and Persona 4 in an all-new storyline will have two editions at launch - a normal retail bundle for $49.99 and the Persona Q: Shadow of the Labyrinth: The Wild Cards Premium Edition for $79.99. Pre-orders are now available for both Persona Q and the premium edition, which you can reach from the official game website: http://www.atlus.com/personaq

Before we get in to details about WHAT'S IN THE BOX, let's make one thing very clear: these versions of Persona Q will only be available in limited quantities. The premium edition will only have a set number of units, and once they're gone, they're gone for good -- we won't ever manufacture the premium edition or the pre-order bonus goods ever again. Getting pre-orders in by mid-July is crucial to ensuring you receive the bonus goods described below. Without further ado, here are the details of the Persona Q box:

Persona Q is the first Persona game for Nintendo 3DS. The game takes the beloved characters from Persona 3 and Persona 4, puts them into an all new adventure. The game is in the style of Etrian Odyssey, where teams of five will navigate dungeons in a first-person view. New characters, enemies, the presence of Etrian Odyssey's F.O.Es will give players all new challenges.

The soundtrack and artbook are typical. That case looks beautiful and the only reason I'm going to buy the preminum edition. The tarot card set is meh