This week we have two more Sega 3D remasters, as well as a few original eShop titles. 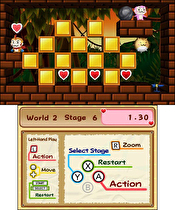 Yet again, we have two new Sega 3D remaster titles this week. But for those that would rather not revisit their childhood, there's Banana Bliss: Jungle Puzzles and Knytt Underground to keep them satisfied.

Re-experience this arcade classic for the first time in 3D. 3D Streets of Rage puts you in the middle of the mayhem as you pulverize thugs to return the city to its crime free glory days.

Yet another 3D remaster of an arcade classic, 3D Shinobi III: Return of the Ninja Master gives you the chance to tackle the Shadow Master in stunning stereoscopic 3D. There's no better way to slaughter hordes of bio-ninjas.

Take control of Morris the Monkey and explore seven jungles, with over 300 puzzles to complete in this 3DS puzzle platformer. This could be the next best thing to Catrap.

Maybe arcade titles and puzzle games aren't your thing; well, you can always keep your gaming seasonal with Winter Sports: Feel the Spirit. It doesn't feature everyone's favorite plumber or hedgehog, but it does feature over seven different winter sports.

If you're still not satisfied, there's always the decidedly more mature game (that's right, it's rated M), Knytt Underground. It's a platformer set in a post-apocalyptic setting, with a Limbo-like aesthetic; what more could you ask for?

Castlevania speaks for itself. If you'd like to experience the series before the term "Medtroidvania" was coined, then this is the perfect place to start.

Seriously, the sale tab on the 3DS is into three pages now.

Thanks for the update on that 3DS sale. I had no idea. Best Buy is putting eShop gift cards on sale starting Sunday 20% off.

Thanks for the update on that 3DS sale. I had no idea. Best Buy is putting eShop gift cards on sale starting Sunday 20% off.

Again?  I made out really good with that deal earlier this month.  20% off + $20 Rewardzone Certificate.

Stock up man. You know you'll spend a decent chunk of change on Nintendo games over the next year, pay now and get a nice savings. (technically not now, but starting Sunday)