He's definitely a fan of the new 3DS Miiverse... 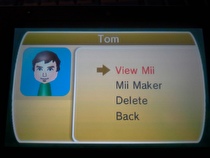 Nintendo is kicking off National StreetPass Weekend by sending over an exclusive gold pants Mii to players who visit Nintendo Zones during the event.

Tom, better known as NintendoTom from the Miiverse, will appear in his golden attire on any 3DS that has successfully logged visits in a Nintendo Zone in North America on December 14 and 15. Once visited, a note should appear letting users know about their new visitor. Players should recognize Tom as Nintendo’s employed guide to Miiverse news and updates.

Nintendo’s National StreetPass Weekend event will be available at Nintendo Zones in Canada and the United States. For two days, all Miis logged by the Nintendo Zone will be mixed up and redistributed around the continent to different hotspots.

Awesome, going to be participating in this tomorrow.!

Already got this gold Mii.

I just dropped by a few Nintendo Zones in my town: Barnes and Noble, McDonalds, and Starbucks. I got two sets of Streetpasses at Barnes and Noble, but I was walking around and browsing for a while. I have 20-something puzzle pieces to go. I'm surprised Nintendo didn't update the panels with the recent releases of Super Mario 3D World and The Legend of Zelda: A Link Between Worlds.

I got two sets of Streetpasses at Barnes and Noble, but I was walking around and browsing for a while.

So does that mean two of them on the second set were wasted because of the 10 limit? Or did you sit down and clear out the first set first?

I cleared them out first.

Visited three separate Nintendo Zone locations today, and I got...

Not a single blasted StreetPass out of any of them. I did, however, get one StreetPass from carrying my 2DS with me while I was in a Walmart (ugh, hate that store.) So, there's that. I don't know why it didn't work correctly. So strange.

There needs to be some kind of campaign to Nintendo to remove that limit, or store the extras for later use somehow.  With the new Mii Plaza games going through all of them is not an insignificant amount of time. I went to multiple Nintendo Zones today and it took forever. I'm not sure I want to even bother doing it all again tomorrow.

So yeah, this happened.

I got 40 today including one from a friend, two random people, and the special tag gold pants. I wanted to try for the 100 Streetpasses in one day accomplishment, but the weather outside is weather. The roads are pretty crummy so I'll try again tomorrow.

Downloaded fire emblem demo from the zone. You would have thought I was downloading the whole game for as long as it took

how do you get so many streetpasses

I went out again today and made a few stops (seven if I remember correctly). I completed all panels which is awesome. I went to a Starbucks that was allowing me to access Nintendo Zone, but wasn't Streetpassing for some reason. Oh well. Otherwise, it was a pretty successful weekend in terms of filling out my region map and collecting pink puzzle pieces. I padded my Mii Plaza nicely. Nintendo doesn't have a map for South Africa. I don't know if Nintendo even released 3DS there, but I got a Streetpass from someone who set it as their location.

how do you get so many streetpasses

It was National Streetpass Weekend. If you went to a Nintendo Zone, you would get six Streetpasses per visit (if someone with a 3DS was there doing the same thing, you would Streetpass them as well which happened a few times). Nintendo has a list of them on their website. Starbucks, McDonalds, and Barnes and Noble are three popular spots.