Get your 3DS ready! 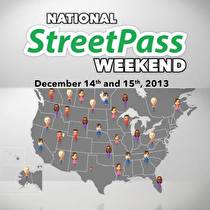 Nintendo has announced a National StreetPass Weekend for December 14 and 15 in North America.

For two days, all Nintendo Zones throughout Canada and the United States will communicate with each other, mixing up the StreetPasses they receive and redistributing them to other Nintendo Zones. This means players can receive passes from all over the continent, filling in their map and logging more players from even more areas than ever before.

That's pretty cool. I hope to see this more often in the future. (Also I wish you could send a friend request to those you meet in streetpass without needing to exchange friend codes.)

I'm gonna get totally sick of McDonalds this weekend.

You and me both dude.

I make my own StreetPasses at home. :D

This could be interesting. I wonder if this'll work with my homemade one.

This should really be a regular feature of the Nintendo Zones

Very cool. Guess I'll be making a trip up the street to my local Barnes and Noble that weekend.

I have to go to Costco this weekend for allergy medicine so I'll swing by the Starbucks in the plaza for some sweet, sweet Streetpasses. I need pink puzzle pieces! I only have like 40 to go.