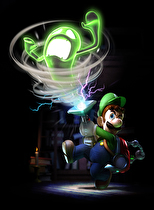 Luigi's Mansion: Dark Moon surpassed more than a million units worldwide in about a week and a half, while Nintendo Land and New Super Mario Bros. U both cracked two million sales across the globe, according to Nintendo's recent end-of-the-year financial briefing. Also, Kid Icarus: Uprising and Mario Tennis Open both sneaked past a million units since their early 2012 launches.