Highlights include Mega Man 2 and a demo you won't FOEget. 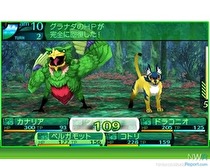 Man, the eShop is making things hard on you this week. Oh, don't worry, it's not as if its interface reverted back to the Wii Shop or anything. It's just that this week's offerings are notably difficult. The Etrian Odyssey IV demo represents a series known to make grown men cry (so much so that a big deal is being made of its new casual mode), and Mega Man 2 for the 3DS Virtual Console is no slouch either. Fist of the North Star: Ken's Rage 2 for the Wii U has you fight off entire armies in one go, and Ah! Heaven for DSiWare makes you work hard for the after life. Hopefully things cool off next week.

Dr. Wily is back, and only Mega Man can stop him. Originally released on the NES in 1989, Mega Man 2 is arguably the finest title in the franchise to date. Or maybe that's Mega Man 3. I don't really want to pick a side, things can get pretty gnarly, I've seen the forums. An action platformer from Capcom, Mega Man 2 sees you take down eight robot masters before taking on the head hancho. Your manlihood isn't at stake...you're mega manlihood is.

Considered a spin off from Tecmo-Koei's Warriors franchise, Fist of the North Star: Ken's Rage 2 pits you against hundreds of enemies at once. The odds don't seem so stacked when you consider that you are able to blow an enemy's body apart. Kind of levels the playing field, you know? New to this sequel are features that bring the game more in line with the Warriors series of games, sped up combat, and a dodge system available to all playable characters. As well, the game's Legend Mode presents a single storyline that is played through with a variety of characters from the manga the game is based on.

The whole "tunnel of light" thing sounds like an alright experience after we pass on, but the folks behind Ah! Heaven seem to really know what's going on. Our ascension to heaven isn't easy, it takes hard work and a knack for jumping. In Ah! Heaven, help a soul jump his way through several locales (such as Japan and France) on his way to heaven's gate.

Nintendo eShop on Wii U™
Fist of the North Star®: Ken's Rage 2 – Fist of the North Star: Ken's Rage 2 is a collaboration between the popular manga Fist of the North Star and the action-packed Warriors video game series. With the majority of the episodes from the original manga intact, the game faithfully re-creates their legendary martial arts and the battles between these captivating characters. Nintendo eShop on Nintendo 3DS™
Brain Age™: Concentration Training – Brain Age is back with new devilishly difficult brain-training exercises designed by world-famous brain researcher Dr. Ryuta Kawashima. Brain Age: Concentration Training introduces newly designed training exercises that challenge players with activities to help refine their concentration skills and the ability to access their short-term memory. Players can spend five minutes a day with the game to help better their focus and attention skills. Brain Age: Concentration Training will be available in the Nintendo eShop and in retail stores on Feb. 10.Etrian Odyssey™IV: Legends of the Titan – Demo Version – Etrian Odyssey IV is the newest addition to the beloved franchise, and brings with it an enhanced graphics engine boasting polygonal enemies and new 3D special effects. The game also features upgradable, customizable skyships that let players travel and battle amid the clouds, a fully orchestrated musical score from Yuzo Koshiro and expanded, immersive 3D dungeons with analog camera control.Pro Evolution Soccer 2013 3D – Pro Evolution Soccer 2013 3D returns to the roots of the sport with unique levels of control and a major emphasis on the individual style of the world's best players. Thanks to feedback from dedicated fans, PES2013 offers full control over shooting and first touch. Endorsed by famous soccer players Cristiano Ronaldo and Neymar, Pro Evolution Soccer will continue to push boundaries and capture the essence of teamwork. Pro Evolution Soccer 2013 3D is now available at retail stores and will be available in the Nintendo eShop on Feb. 12.Also new this week:
• Mega Man 2 (Nintendo eShop on Nintendo 3DS)• Tom Clancy's Splinter Cell 3D (Nintendo eShop on Nintendo 3DS)• Rayman 3D (Nintendo eShop on Nintendo 3DS)• Ah! Heaven (Nintendo eShop on Nintendo 3DS/Nintendo DSi™ Shop on Nintendo DSi)

Do we know the price of Ken's Rage yet?


Just updated the article. Really wish the prices would accompany the press release...

Especially since the EO IV demo apparently lets you transfer your save to the retail game.

Well at least we got the Etrian Odyssey IV demo.

Hey NWR, how about asking around as to why we are getting the NES Mega Man games, when there were 5 Gameboy Mega Man games. And those haven't been released a million times over before.

Have you played the Game Boy Mega Man games?  I have, and while i do like them, they don't make good use of the screen the way the nes games do in a sense.  I still want them released, used to have all five of them before the dark times of evil thieving roommate......

The prices for Rayman 3D and Tom Clancy are HILARIOUS.


Also Rayman 3D is the most cynical port-job ever. So if you buy it - part of the problem.

The prices for Rayman 3D and Tom Clancy are HILARIOUS.