Players must register with Origin if they want to play FIFA 13 or Mass Effect 3 online. 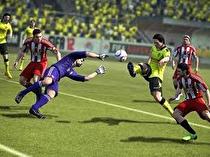 Wii U games from Electronic Arts will require an Origin account for online play and services, according to the latest version of the publishing giant's privacy policy.

The document states that an Origin account will be established when a user signs up to play EA-published software on Wii U, using their "Nintendo account information." The console will also provide EA with data such as Nintendo Network ID, Mii details, email address, friends list, location, language and date of birth.

It is unknown what exactly constitutes a Nintendo Network ID, although it is possible that it will be similar to the system currently used on the Nintendo 3DS, where each player is assigned a Mii character and personal Friend Code.

Confirmed EA launch titles include Mass Effect 3: Special Edition, FIFA 13, and in North America, Madden NFL 2013. All three of these games feature online modes, so players will need to log in to Origin in order to play them.

Origin was launched last year by EA to serve as a unified digital distribution and social networking service.

FIFA and Madden will most likely use "Online Pass" too so let Nintendo gamers get used to that too.

Um, EA has had this for several years with their games (in the form of the EA Online Pass). The only difference is now it will be Origin instead of EA Online Pass. So this is nothing new for playing EA games online.

this is the same as every EA game since at least dragon age.

That.  I mean at least if we are connected vy Origin at least allow Cross Play.  I'm not rebuying Mass Effect 3 but I wouldn't mind doing Multi with some of the Console gamers.

Me too. Origin is just bloatware!

Most likely never. There isn't much financial incentive for the companies behind the platforms to let you play with others on different systems.

Yeah, At the point your using your own online infrastructure I assume the netcode be the same at that point.

Me too. Origin is just bloatware!

Have you played any online EA games in the last 5 years? Because EA  already has been requiring you to sign up for an online account because you connect to EA's servers to play online.

I may have signed up for an EA online account for Dead Space 2 or NBA Jam. I don't remember if I did or meant to. Would that have been the same as an Origin account or would I need to sign up for Origin specifically?

I guess it doesn't matter. I can always sign up again if necessary. I have like 7 email addresses.

Old EA accounts transitioned into Origin accounts. I buy several EA Sports games each year so I had an account, and at some point it said it was turning into an Origin account. I may have had to go to a web site and click something, but I can't remember if it was for that or something else.

If memory serve you do.  Its an artifact for people who have multiple accounts to make sure there consolidating the right ones.