He scratched a table and growled while saying "no comment." For real. 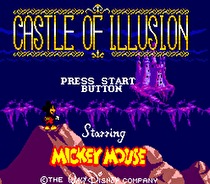 The official word on Castle of Illusion hitting Virtual Console and a new Ducktales game is, as of this moment, "no comment," according to Epic Mickey 2 Director Warren Spector at a roundtable during New York Comic Con. He followed his rehearsed "no comment" with a polite growl and brief scratch of the table in front of him.

At this point, the idea of a Ducktales video game appears to be Spector's dream game (following Epic Mickey, of course), being a fan of Scrooge McDuck. Scrooge appears in the 3DS Epic Mickey game. Spector's studio Junction Point is now owned by Disney, and while their next project is probably at least a year away from being announced, they are currently developing something as their follow-up title to Epic Mickey 2.

At this point, we know the people making these Epic Mickey games really want to bring Castle of Illusion and Ducktales back in some form, but it's not entirely in their hands, as Sega and Disney need to work out a deal for Castle of Illusion, and Disney gaming executives need to think a new Ducktales game is a viable product.

I wonder if we could get get the Game Gear version of Castle of Illusion on 3DS. The Game Gear game is based on the Sega Master System Castle of Illusion, which is completely different game from the Genesis one (it does share the story and some other elements). It would be fun to play that version, which I've heard has gameplay similar to the NES Duck Tales.

*Faintly hears the words "a new Ducktales game" being uttered from thousands of miles away*
...
*Ears perk up*

My Ducktales sensor just went off. Damn you Spector!

I'm with Spector.  I want a new Ducktales game.

The only way DT gets on VC is if Capcom and Disney do another game together.

This is why we need Street Fighter X Pirates of the Caribbean. Now.

Ducktales, and then Darkwing Duck.