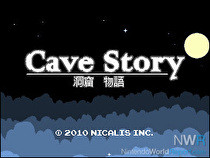 The DSi version of Cave Story has been removed from the eShop in advance of the release of the upgraded eShop version coming this Thursday.

When announcing Cave Story's eShop port, Nicalis told Nintendo Power that they may remove the DSiWare version from the 3DS eShop.

The original date it was taken down is unknown, but a search on the eShop reveals only the upcoming remake, and the retail release of Cave Story 3D. Cave Story is still available for purchase on DSi's through the DSi Shop for 1000 Nintendo Points, equal to what Nicalis is charging for the upcoming eShop version.

The eShop-specific Cave Story is an enhancement on what was presented in the DSiWare version, which is likely the reason behind its removal.

How many damn versions of this game are going to come out ? It's time to make a sequel or move on .

So many good games on eShop, not enough time or money...


My feelings on the matter of Cave Story is mixed. On one hand, yeah, let's give it a rest. But I know that this title was made available for free for years, and Pixel deserves whatever he can get from it now. I'm sure Nicalis is moreso behind these porting decisions, but even still, I don't mind more people getting the chance to play CS. It's not a Street Fighter situation where you're getting an updated version of the game every few years on the same system.


It's Nicalis' Super Mario Bros. I suppose. I'll let them have it. Helps them fund other projects like Nightsky I suppose.