Gamers who bring their 3DS to the TGS with the demo on it are also in for a treat. 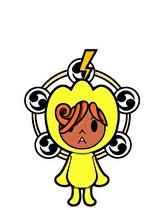 A demo for Denpa Ningen no RPG 2 is coming to the Nintendo 3DS eShop on September 19. The demo will span very early parts of the upcoming game as well as make use of StreetPass. The game will feature more dungeons, fishing (similar to what is found in Animal Crossing), sea travel and more.

Looking forward to some reviews on the first Denpa Men game. I love me some RPG's, and there is nothing wrong with switching the formula up a bit from time to time :D It could be fun to use the AR viewer to catch some radio wave men