The World Ends with You Announcement Coming in Seven Days

Just like in the DS classic, Square Enix's new website shows that we have seven days to find out the future of TWEWY. 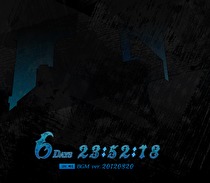 At midnight ET, a countdown on a Square Enix website struck zero yielding another countdown along with some tantalizing connections to the DS RPG The World Ends With You.

While we don't know what Square Enix is going to announce, it is beyond a doubt that it will be related to TWEWY franchise. The evidence includes:

The countdown will expire at midnight ET, August 27. Until then all we can do is guess what Square Enix has planned.

They'll troll us all and it will be exclusive to the Ouya.

It will obviously be on the 3DS. I think the whole Two Screen Combat would be even harder with the Wii U.

This game should come out December 21, 2012 because then it would literally live up to its name.

I note there's no CERO rating, but I'm hoping that just means the game's being rated now.

But if it's a social game, or cellphone only, Nomura is getting gutted.

You know, I wouldn't necessarily be so sure about a TWEWY sequel being on the 3DS. It's one of the most touchscreen-based games on the DS, and as we know, gameplay on the 3DS is almost always focused on the top screen. Unless they were to go for a totally different kind of control input, it might not be the most appropriate fit.

I'm trying to look into this when I have time.


BTW: I missed this one hint: SubaSeka is the normal Japanese shorthand for TWEWY.
The Japanese title is Subarashiki Kono Sekai
The URL for the site is /subaseka/

I added it to the article.

I think it ma be just a remake. I don't see how they can make a sequel.

The storyline could allow for multiple games in multiple cities, or even other parts of Tokyo.

The title for this article should've been

"In Seven Days The World Ends with You Announcement Revealed"

The title for this article should've been

"In Seven Days The World Ends with You Announcement Revealed"

The world ends with Wii U

Also, this: www.square-enix.co.jp/subaseka/images/NCQKL/sound_3days.mp3
It's the remix of the song from the game called "Calling," and it was taken from the website itself.

Also, just to remove some more doubt, here's a comparison of the image from the website and the 109 building of Shibuya in the original game: http://mediacdn.disqus.com/uploads/mediaembed/images/327/3200/original.jpg

Well, the time has come and gone. Quick recap:
There is a new version of TWEWY on the iPhone, called Solo Remix. People were down about it, fans raged at SquEnix, and life carried on. However, the secret ending of the game now carries a tantalizing hint that all is not over: http://i.imgur.com/oCjx9.jpg
We also know that the official release of the Solo Remix soundtrack will take place at the same time as TGS is going on. This has led people to assume that something will be announced at TGS, and it will relate to TWEWY.