Mega Man Coming to 3DS eShop Next Week in Japan

The blue bomber's original adventure for the Famicom is coming to Japan! 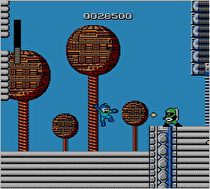 The Famicom version of Rockman, known as Mega Man in the West, is coming to the Nintendo 3DS eShop on July 18 in Japan for 500 yen.

There is currently no word on a release in other territories.

YUUUUUUSSSSSS!!!!
Wait, only in Japan? FUCK.

As soon as I read the words "..in Japan" my body split into circles shooting out into 8 different directions.

*looks at his copy of Megaman Anniversary Collection and tosses it*

Awesome news! I hope it comes to NA eventually as well!

As soon as I read the words "..in Japan" my body split into circles shooting out into 8 different directions.

This is just an... awesome reply. I even heard the sound effect!

I was hoping this was the Gameboy exclusive one. They really need to get AT LEAST Mega Man V out, if not the other Gameboy ones. MMV is RIDICULOUSLY expensive these days.