Sports games seem to have taken over this week. 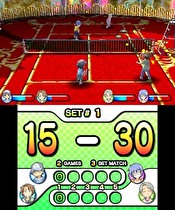 Nintendo's 8-Bit Summer has begun and not only does it kick off with some classic games, there are plenty of new non-8-bit titles to enjoy, as well.

Family Tennis 3D - $6.99
Play tennis with eight different characters across six different courts in Family Tennis 3D. Not only can you try your hand in a tournament, there are plenty of mini-games to enjoy, too, including Roulette Rally, Human Backboard, and Survivor.

Akari by Nikoli - $4.99
The next Nikoli puzzle game, Akari, is available today. In Akari you set various lights around the board using the hint numbers provided; this is done in an effort to light up all of the white space. The game features both pre-made puzzles and randomized ones for your continued enjoyment.

3, 2, 1…WordsUp! - $1.99
3, 2, 1...WordsUp! challenges your grasp of five different languages as you try to create as many words as possible using a set amount of letters. Create enough words within the given time limit or else you will lose.

Topoloco - $4.99
Get ready to study topography in Topoloco. Professor Topoloco can teach you about five of the continents using mini-games that have you locating cities and countries, and dragging flags. Whenever you are comfortable with what you have learned, you can take a swing at the final exam.

The Legend of Zelda - $4.99
The original Legend of Zelda is now available not only to ambassadors, but everyone. In the game, you must gather the eight pieces of the Triforce, save Princess Zelda, and stop Ganon.

Heroes of Ruin - FREE
Heroes of Ruin releases on the 3DS later this month, but you can start enjoying the action now. Check out impressions from James Dawson time with the game at E3.

Holy hell! So many games but not many I'm interested in. :/

I heard Family Tennis is okay, and I'll totally get the demo for Heroes of Ruin, but man, so many games, so little I care about.

I have a lingering feeling that the VC titles that Nintendo has yet to announce for this summer sale will just be updates to the Ambassador games.

Who in their right mind would be for the NES Golf game? I hated getting it for free.

I guess a lot of content is better than none, although a little bit of good content trumps both.  Oh well.  At least the demo will be interesting, as Heroes of Ruin is about the only "big" 3DS game since...  Kid Icarus?  Will be nice to try the game firsthand after seeing middling reviews.

Ima wait till next wek for the eshop release of Johny kung fu! :)!

I don't even remember seeing those two virtual console games in the 8-Bit Summer trailer. So much for new content, I already got them both from the Ambassador program. I'd like to think that Nintendo would be smart enough to release at least one 100% new VC game each week.

You weren't looking close enough, then. Legend of Zelda was both mentioned in Nintendo Direct and the first game in the trailer. :P

I feel like it would have been better to spread it out. Like, if it was LoZ and a new GB game this week, and then Kirby's Pinball Land and NES Open next week, it'd be much better received.

2020 Baseball is actually a lot of fun.  I used to have it on the SNES.  Your pitcher would explode if you kept him in for too many innings!

Hey Nintendo, who would have thought that having sales on downloadable games works.
This will be the third game I've purchased in as many weeks.

Akari is actually really good, if you're into that kind of thing. It's got a real Picross vibe to it and gets challenging really quickly. I'm kind of in love with it right now.