Wii U will be a Bring Your Own Storage party. 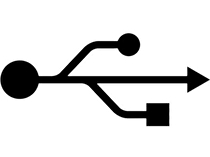 Wii U will support external hard disk storage via USB connection. At the Nintendo Analysts meeting at E3, Nintendo confirmed that the Wii U will not contain an internal hard disk, instead letting users provide their own storage using cheaper external USB drives.

While the Wii U will almost certainly provide a nominal amount of internal flash storage for game saves and some game downloads, the size of full Wii U retail downloads will require users to provide an external storage device of their own. Wii U specs have for a long time shown USB 2.0 support (there are four USB ports on the current Wii U console hardware design). Alternatively, the Wii U also has an SD Card slot which could ostensibly used for a similar purpose.

I would have liked the option for an internal HDD bay. C'est la vie. I like that Nintendo is making the USB HDD storage solution an option from day 1. I'll probably stick with a larger SD card if I absolutely need more storage.

While it's disappointing to not have larger capacities with the stock system, this is absolutely the right move.  Many Wii U owners will never need additional storage, and at least the ones who do will be able to buy whatever solution they see fit, rather than sticking with proprietary storage devices like Xbox 360 does.

I would prefer it built-in but at least they support it.  It's annoying that this sort of news trickles out like this.  When Nintendo provides the spec sheet this should be on it.  So should the info about transferring downloaded games from the Wii to the Wii U.  There is no reason to keep that sort of thing underwraps.  It's GOOD news.

Why are these guys so terrible at PR?  I swear you could grab any random jackass mulling around a Gamestop or Best Buy and they would do no worse of a job.

"We've created the Wii U for people who love games, but those very people won't be satisfied with the meager storage on the Wii U.  But that's their problem."

Good job, Nintendo.  You're creating jobs in this economy for carpenters for when my face is done making this hole in my wall you've been encouraging these last couple of days.

Still, I suppose this is better than what they did with the Wii: give jack all for storage and then have to be pestered for several years into letting us use our own storage solutions.  They could at least say what their "nominal storage" is.  "game saves and some downloads" could mean just about anything, especially if Nintendo still has things like WiiWare and Virtual Console games in mind for "downloads."

The rumored specs are a little dissapointing, but I am glad (and I had predicted) that they would allow for external storage from day 1.

Time to get a new extrenal Seagate Barracuda 1 TB! ha...well, maybe not that big..

I guess this is preferable to Nintendo having some sort of propriety solution. Still, if Nintendo are going to be encouraging people to download full retail Wii U games you'd think they'd provide their customer's with everything necessary to do so.

I sometimes wonder if they have even finalized all the specs.  I expected a leak from some developer this week on Wii U's relative power, but there hasn't been a peep.  I know that Nintendo wants people to focus on the games, but the best way to get people to think about something is to keep it a secret.  Hopefully, they will finally release everything in a week or two when the E3 buzz has worn down.  Then we can talk for a week or two and then refocus on the games


Also, as far as the internal flash memory goes, it should be at least twice as much as the disks hold.  Otherwise average families will never download full games.  Give them enough memory to try downloading a couple of times.

My Biggest Gripe about this is USB 2.0  They Knew they wouldn't have internal HDD then they should have put in one of the ports that was really meant for and dedicated to External HDD.  I want my downloaded games to be throttled by the Harddrive speed not the connection blah...

I can dig it. I have an extra 300gb ext hard drive laying around here somewhere...

i have a tb external hard drive, so yeah good news, also if there happens to be some sort of media reading thing that lets me play divx AVI files than the wii u will own the living room for sure.

What about flash drives?

So it's basically going to work EXACTLY the same way that softmodding a standard Wii with an external Hard Disk plugged in to the USB ports currently works.

Glad to see Nintendo recognizes a good configuration from the hacking community and is willing to implement the same idea legitimately now.  ;D

Kytim89:  If it's implemented similar to the way hacking is currently done, it will simply support the "USB mass-storage device class".  In theory this means any storage device that conforms to this standard will "just work" from the USB port including: thumbdrives, usb hard drives, usb-based solid state drives, or any other hypotheical future storage medium that conforms to the class.  There's a layer of abstraction which makes the actual physical device irrelevant  to the machine.

Really? That's good to hear. I was worried that USB 2.0 wouldn't be fast enough. Though I guess that means I still need to make sure I purchase a quality HDD.

I've got a 2TB drive that is partitioned as half WBFS and half NTFS, hopefully WiiU will support it...and USB 2.0 is plenty fast for actually running games.

I doubt that the Wii U would support WBFS natively.  So if NTFS is partition 1, it should be fine.  If not, you may need to repartition that.  It will surprise me if Wii U will look for more than the first partition for access.
I picked up a 2TB external hard drive for $99 to prepare. :)  November?  are you here yet?