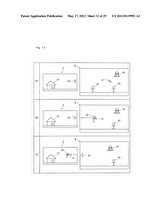 Nintendo is thinking about the ways that the Wii U screen and TV screen can be used simultaneously with the Wii Remote, as revealed by a patent application published today.

Though previous applications mentioned the possibility, this application is the first to explain how it would work. Players must first point at each screen, pressing a button when centered. The attitude of the Wii Remote is recorded at each point so that the game later knows at which screen the Remote is being pointed. The sensor bars can be turned on and off independently to provide more accurate pointing.

A simple game is described in the application. In it, people who are being attacked by UFOs on the TV screen must be grabbed and dragged to the tablet screen where they can find refuge in a house. The description is reminiscent of the Wii Play mini-games, and could be part of a similar Wii U collection.

The patent application was filed on Oct. 7, 2011 (Nov. 17, 2010 in Japan), and the authors listed are Kenichi Nishida, Yoshikazu Yamashita, and Takayuki Shimamura.

This is kinda crazy. Pointing at a big screen and then a small screen sounds pretty cool, but I worry that the size of the small screen might prove frustrating.

I'd love to see a game use this for things like shinning lights on a ghost, or looking around to find something

But you realistically are not "pointing" at the small screen.  But are pointing at the sensor bar in the WiiU controller.


All this is doing is exploring a way that two sensor bars can be used together in a way that will not cause interference.  I imagine a simple algorithm could be created to adjust for pointing more naturally at the small screen.


It sounds like fun, and could be used for many type of mini games and a great golf game...but I don't see much use past that.  Still could be very cool...and could be amazing with multiple WiiU tablets.

After seeing the mysterious built-in sensor bar on the tablet controller last year, I'm not surprised Nintendo is looking for unusual implementations. However, I still think it will primarily be used for playing Wii games on the tablet in the backwards-compatible mode.

The overall diagram is generic, and the most realistic application we’ve seen so far is the golf demonstration in the Wii U reveal video. I could see where a game like that would need IR support off the tablet and the TV; but what about MotionPlus? Doesn’t the gyroscope greatly reduce the need for the IR because the controllers can be sensed in a 360-degree environment? Maybe we’ll see a more cohesive utilization of these two?

@Jonny  I definitely think that’s true; but I think it’s less than optimal to play a game using the Wii controller on a 6-inch screen. The proximity of the controller (and eyes) to the screen would have to be very close to play games like Galaxy or Skyward Sword in order to see the on-tablet action (not so say that it wouldn’t still be remarkable).

@ Jonnyboy117
We should be happy that they are allowing Wii games playable on the Tablet at all!
They could have easily said "only the new games work on the new controller" - in fact that still might easily be the case knowing Nintendo.
We'd all love Mario Galaxy to be playable only using the Tablet, I mean you can shake it and point using it right, why wouldn't it work?
But I highly doubt that would happen without a HD remake. If it does happen, we're more than likely going to be playing using a Wii Remote pointing at the Wii U Tablet, not ideal but I'll take it if I can play Galaxy in bed!

I really hope they make the Tablet a universal remote as suggested, this could be the advantage it has over the other systems, a full media centre controllable all from one (portable) screen.
The problem the 360 and the PS3 have is that they're gaming systems through and through, no self respecting parent/grandparent is going to say "fire up the Xbox I feel like watching Harry Potter", the interface is baffling (yes even the newest ones) it's one of the reasons why Netflix is most popular on Wii, the remote controller like interface and easy to navigate buttons.
With stuff like Hulu getting more popular, an easy to use and familiar interface could give Nintendo a huge advantage. I can't wait to see what they do with it!

When I think of how the tablet can be used for videogames that last thing I think about is pointing the Wii remote at it.  That sort of idea makes sense for a TV because the TV is big and stationary.  The tablet is small and has to be held or propped up.  The whole concepts seems stupid.  It seems like exactly the sort of idea we would get from a company that designs their controllers entirely for marketing purposes and then struggles to think of how a decent game could use those features.

That would be akward unless Galaxy is really a Mario Galaxy inspired bedroom game and you just need the music. :P

Or do I have to prop the screen up on something?

Or do I have to prop the screen up on something?

Also, something like that golf demo they showed at E3 last year, where the controller is on the floor showing the ball.

That's a different use though; you're not interacting with the same objects across both screens.

When was it confirmed that you can play regular Wii games on the UPad?

When was it confirmed that you can play regular Wii games on the UPad?

It wasn't, hence the trepidation about getting too excited about that idea...

I'd love to see a game use this for things like shinning lights on a ghost, or looking around to find something

I was thinking the same thing.  I remember hearing a rumor they were working on a Luigi Mansion for Wii U.  Perhaps the Wii remote user will use the poltergeist vacuum to catch the ghost and drag them to the Wii U tablet, with the secondary user controlling the tablet playing a secondary game to keep the ghost from escaping and returning back to the TV screen.