Nintendo's next eShop game is out today in Japan, North America, and Europe. 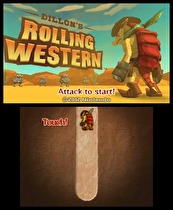 The Rolling Western, developed by Vanpool, is available now on eShop worldwide for $10, according to today's Nintendo Direct presentation.

Originally revealed at E3, the game was confirmed to be available for each region during their respective Nintendo Direct presentations. You can read our impressions of the game here.

22nd February 2012 – Join Dillon, the ranger armadillo, on his colourful 3D quest across the Wild West to save villages and their livestock, the cute scrogs, from invading rock monsters named grock. Dillon’s Rolling Western™ will not only test your quick thinking and skill in the heat of battle, but also your preparation and planning abilities as you aim to stay one step ahead of the invading grock. This unique action tower defence Nintendo 3DS game will be available to download via the Nintendo eShop today.

Dillon’s adventure takes place during the day, dusk and night, with different challenges and tasks to complete. During the daytime while there are no grock around, build static defences around each village including watch towers and gun towers, and collect as many scruffles, a turnip-like vegetable, in order to increase the number of scrogs in the village. Make the most of the daytime by installing weapons in the gun towers and fortifying the village gates as you install the last line of defence before dusk.

As dusk falls, grock will begin to rise up from cracks in the ground as Dillon finally comes face to face with his enemies. Grock will begin approaching the village in search of the scrogs and put your preparations to the test. Your gun towers will attack enemies in range, destroying some of the invaders, but it’s up to you to defeat the rest of them with Dillon’s fast-paced combat moves using the stylus and Touch Screen.

The unique Nintendo 3DS™ Touch Screen is central to the action; using the stylus you can control Dillon’s core moves of rolling and charging, as he fends off the grock. You can also learn more advanced moves as you progress through the villages.

Once you have successfully defended against the grock assault, night appears. The monsters may have gone, but there is still plenty to do to ensure that you are ready to defend the village again the following day. Earn extra money by talking to the characters in the saloon and completing the side-quests given by them, as well as practicing your attacking skills, improving Dillon through changing his wardrobe and healing him with a hearty meal. There are a variety of villages to defend in this unique wild western, each with different terrains, grocks and challenges for you to master.

So straighten up your cowboy hat and don your chaps as you take on the monsters in Dillon’s Rolling Western, released across Europe on Nintendo 3DS today.