Join Iwata for new and upcoming 3DS and Wii titles. UPDATE: Reggie too! UPDATE: And Europe! 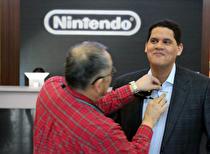 The third Nintendo Direct broadcast is scheduled for Wednesday, February 22, Nintendo revealed on their website.

Nintendo President Satoru Iwata is set to reveal the latest Nintendo 3DS and Wii titles, but no specifics were given. The broadcast will be available in Japanese on Nico Nico Live and Ustream beginning at 8 pm Japan Standard Time (6 am EST, 3 am PST).

The company started the Nintendo Direct initiative last October as a way to connect directly with consumers. The last broadcast took place on December 27.

Update: Nintendo of America President Reggie Fils-Aime will be revealing English-language news at 9 am EST, 6 am PST at nintendo.com/nintendo_direct. Both Iwata and Reggie have sent out special Swapnote messages, each with their own custom stationery. Europe will have their first broadcast starting at 1 pm CET in various languages.

Ho, Wii titles? Other than that Kiki Trick game?


I have doubts that it will be anything that will cross the to the Americas, Oceania, and Europe, but I'm interested if Nintendo has anything new for the Wii's twilight year.

I just got a swap note from Reggie him self telling me all about this. Ive never been more giddy.  :D

Considering that they said they would release some Wii U news as we get closer to E3, we may get some here.

Maybe they can announce more titles that will come out in the EU and AU that won't be released in North America.

(Annotation of my first post.) Especially seeing that Reggie is going to have one tomorrow also, we will get some 3DS title news. But hopefully we get some indication on whether they are going to change the WiiU's name or not. (Not expecting anything in the form of software until April/May)

A news conference on the launch day of the PS Vita, hmmm, hopefully Nintendo has some impressive news. What I would like more than a new game or a release date, though, is a simple YouTube app on the 3DS. Wii just got Hulu Plus, so maybe there is a chance.

Well I'm glad for a special note like this, but is there any reason they couldn't have just sent a notification?

Well I'm glad for a special note like this, but is there any reason they couldn't have just sent a notification?

Any chance Daany could send out the Japanese Nintendo Direct stationary?
Please and Thank you!

Wednesday, eh?  My body will be ready.  Oh, we're done with that one now?  Gotcha.

I hope for something, anything, about Paper Mario.  It's why I bought the system, and I love my 3DS regardless, but I want a PM crumb now.

Can someone send us the Iwata stationery, please?
Thanks in advance.

I'm expecting that whenever I get a chance to check my Swapnotes, someone will have already sent me the Reggie stationery and I won't actually have to ask around..... Why? Because people on my friendlist are cool like that. :)


edit: I have been the victim of autocorrect on a cellphone with this post. I apologize for that.

I have both stationary, and can send them to anyone who asks. Just add this code: 3866-8814-7746, and send me a pm with yours. I'd really be happy if whoever has the new years stationary could send it to me^^

I'll open the bidding at Metroid: Another M and a public deuce-dropping by Reggie.

(There, I'll be happy no matter what happens.)