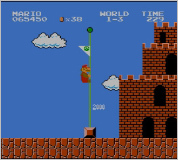 why spread this out? Just release all of them at once