Sora and Riku will encounter Disney's famous characters in a musketeer inspired world. 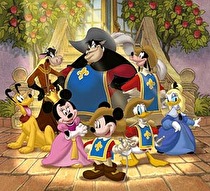 A new world for Kingdom Hearts Dream Drop Distance has been revealed in the latest issue of V-Jump. The world is based on the movie "Mickey, Donald, Goofy in The Three Musketeers".

Country of the Musketeers joins "Prankster's Paradise" (Pinocchio world) and “La Cité des Cloches” (Hunchback of Notre Dame world) as one of the confirmed Disney worlds for Kingdom Hearts 3D.

In addition, the publication confirmed that Neku will not be the only character from The World Ends With You that will make an appearance in Dream Drop Distance. Joshua and Beat will also be representing Square Enix's popular DS RPG.

Weren't the additional story and areas for Agribah in KH2 inspired by Return of Jafar?


Regarding TRON, a world was in Kingdom Hearts 2, so we may get it in the sequel with TRON Legacy out and about.