GBA Ambassador Games Coming Out This Week in Japan and Europe 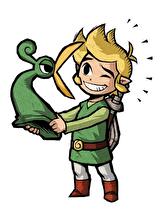 The Game Boy Advance Ambassador games are coming out on December 16, according to a SpotPass message sent out to Japanese and European 3DS systems.

The message also confirmed the four other games that weren't confirmed previously. They are:

Those games will be available along with the six previously confirmed titles.
It is very likely that these games will also hit North America this week, but it has not been confirmed. We'll let you know as soon as it is.

Now that is a list to get excited about.

Yahoooo! I've never played Minish Cap so that is awesome. I guess I'll finally give Fire Emblem a chance as well. Haven't played F-Zero or Mario Circuit so those are the games I'm most interested in.

Have beaten Metroid, Kirby, and Warioware. Also, own Wario Land 4 and Mario vs. DK but have never finished them. I'll beat them on the orginal GBA cartidges first. Have Yoshi's Island for SNES but haven't played it in a long time and it will be nice to have it in a portable version.

What an amazing haul. I'm excited to play Yoshi's Island again and to try Kirby.

And I saved $80. Everything is coming up Milhouse.

I've got Minish and Kart, but my DS Lite is having issues and this'll be easier than dragging out my SP.  Haven't played the rest, but it looks like a pretty astonishing, dud-free lineup.  I wish I could play Zero Mission, but it'll probably be offered later.

For those who haven't played Minish, it's cool--especially if you like Liliputian worlds.

I paid full price in August as soon as they announced the Ambassador games. I have no regrets, especially as I have played a grand total of ZERO of these GBA games.

I paid full price in August as soon as they announced the Ambassador games. I have no regrets, especially as I have played a grand total of ZERO of these GBA games.

How did you miss out on such a stellar line up of games?  I could see not having all of them... but not having *any* of them? :(

I've played Mario Kart & Wario Ware. All the rest will be 1st time experiences for me.... assuming I ever play them.

This makes up for that god awful Mario and Yoshi game.

A little sad at the lack of Mario & Luigi Superstar Saga, but the list is nonetheless very nice. I really hope that, like the GB and GBC games, these will show a Gameboy Advance border when you load them in the true aspect ratio.
Here's hoping more GBA games are eventually added as paid downloads as well. Metroid Zero Mission is better than people give it credit for.

Great! The NES's list was somewhat disappointing as it included a mix of classics with games that there is no reason to play anymore. However, the GBA list is much stronger as there are much fewer weak titles.

I own most of these games already but it will be nice to have them on my 3DS, especially Wario Land 4. Enjoyed that game so much in the past and I have no idea where my copy is now.

Metroid Fusion is the only game that I actually own on the list, so I'll be getting lots of play time with these.  Minor disappointment that the rumored SMB3 didn't make the cut, but it's still a worthy list of games.  Far better than the NES games, that's for sure.

That's considerably more enticing than the NES Ambassador games, which ended up being so-so. Even though I own several of these already, my GBA cartridges are all over the place - this makes the whole thing much more convenient.

I've only played two of these titles to death and I'm seriously excited to get these games. I'm looking forward to Minish Cap the most and F Zero just might shave off my Mario Kart angst too. This is an awesome haul of games.

Same date for EU.  http://i.imgur.com/rZZxS.jpg Got a spotpass notification now.

Well done Nintendo! I, too, have only played/owned 2 of those games on that list and am super excited to get the rest. For all the flak that the 3DS got this year for the lack of software (which I still think was blown waaay out of proportion), I have accumulated a significantly large backlog of games already between virtual console, eShop games, and retail (and I own and completed 11 retail games!).  I hope this system continues its course upwards.

I own Wario Ware, Mario Kart and Metroid, never played the rest of them. I did not like Mario Kart at all, the other two I love. I have been trying to score some of the other games (Zelda especially) on ebay, so this works out perfectly for me. I am another of the $169.99 club who got a steal.

I sort of wish it was Zero Mission instead of Fussion simply because I have Fusion and that would make the whole list games I never got around to.

Sweet, though I would like to have had Metroid Zero Mission on the list, even if Nintendo offers it for sale on a later date I would gladly buy it.

That is a surprisingly solid list of games there.  Off topic and I apologize in advance, but will I be able to transfer these games to a new 3DS?  I know that the new update now allows for game transfers, but I haven't been able to find a detailed list of everything that can be transferred over

I can't tell you how excited I am to play Fire Emblem again. I'll play Sacred Stones 100 times over. I love that game.

That is a surprisingly solid list of games there.  Off topic and I apologize in advance, but will I be able to transfer these games to a new 3DS?  I know that the new update now allows for game transfers, but I haven't been able to find a detailed list of everything that can be transferred over

I believe Ambassador games are transferable as well through the update to a new system. I just heard that answered on the 8-4 Play podcast last night.

That list is baller! Can't believe they are giving up so many potential sales by offering such an awesome selection of games. There aren't a ton of GBA games missing here that I would want to buy on 3DS.


...and not one pokemon game? I know my username has quilava in it, but still, not even firered? I'm still borrowing my cousin's copy. maybe it'l be available in the future..

Will I have needed to play Fire Emblem to understand the story in Sacred Stones?  I never played the first one

I really hope America gets these this week as well...

As for the list, I'm certainly stoked. Because I never was really into the portable scene that much until relatively recently, I missed out on most of these. Wario Land, Fusion, Kirby, and Minish Cap excite me the most. Fire Emblem and Mario vs. Donkey Kong are mostly-unknown quantities to me, but they seem to warrant some intrigue.

Yoshi's Island and WarioWare I've played thoroughly, though I look forward to revisiting them. Mario Kart and F-Zero, though, seem a tad like overkill... but then, I'm not a huge fan of the genre and I have MK7 filling any racing void I may have had before.

I admit I wish Zero Mission had been chosen over Fusion, and maybe something else instead of F-Zero (Advance Wars?)... Superstar Saga instead of Fire Emblem... well, we could all nitpick all day, but I think most will agree this is a high-quality lineup and pleasing news.

Will I have needed to play Fire Emblem to understand the story in Sacred Stones?  I never played the first one

Nah, the Fire Emblem games are all very standalone.

This list suggests someone who knows what they're doing actually made the decisions.  The NES list seemed too much like a scattershot from someone who doesn't know games (ie: Reggie, ha ha).  But this list not only is good sampling of GBA titles but it only contains one SNES-to-GBA port and it's one of the few big SNES games that is NOT on the VC!

I'm so glad I don't have to flip shit about these games getting pushed back to next year. And a wonderful lineup to boot!

That hasn't been confirmed yet that we will get them this week.
The Legend of Zelda: Minish Cap - Never played it, not a big fan of the 2D Zelda's, but I will try it.
F-Zero: Maximum Velocity - Didn't like it when I played a demo in stores
Fire Emblem: The Sacred Stones - Never played a Fire Emblem game, will try it
Wario Land 4 - I remember hearing good things about it, glad I will get to try it now
Kirby & The Amazing Mirror - Same as WL4
Mario Kart: Super Circuit - Didn't like the demo, but it's free
Yoshi's Island: Super Mario Advance 3 - I loved the SNES original, would love to play this since Nintendo seems to not be interesting/able to release it on Virtual Console
Metroid Fusion - Not a bad game. Not as good as Metroid: Zero Mission, but still
WarioWare, Inc: Mega Micro Game$ - Loved the little bit I played (it was stolen from my bookbag shortly after I bought it)
Mario vs. Donkey Kong - Never played it, look forward to it

Awesome! Can not wait for these games. Great list! Never played a Fire Emblem game, looking forward to trying it out.

I own 7 of these games, and have them right here within arms distance.  But being able to carry all these awesome games around without the cartridges on one system is awesome.  These are certainly some of the best games Nintendo had on their GBA.

I don't know if I'm in the minority here or not, but I've played all of these games. I'm still pretty excited though since I never actually beat most of them. I think I look most forward to revisiting Minish Cap, Kirby and WL4. I never really got anywhere in Minish Cap and the other I got stuck in towards the end and just never tried to beat. Fire Emblem frustrated me as I lost certain characters and couldn't get others because I lost some. A fresh play through will be really good as I wait for a FFTA3D (hint-hint, Squeenix).

Was really hoping for one of the Advance Wars or Golden Sun games. However, that is a great set of games I have only played two of those from that list so I'm still excited.

That list is baller! Can't believe they are giving up so many potential sales by offering such an awesome selection of games. There aren't a ton of GBA games missing here that I would want to buy on 3DS.

As someone who buys at least something every Thursday, I have to agree--  These GBA games represent a good chunk of my money that Nintendo won't get.  Though, the cynical part of me wonders....are the Ambassador games truly a manifestation of Nintendo's generosity, or are they giving these away because they don't plan on selling NES and GBA games on the 3DS VC?  I mean, we're 9 months in and we just got to the 2nd GBC game!  And we're barely on, what, 13 or 14 GB games?

The list is definitely better than I was expecting after the NES list. I also own only 4 out of these 10, as opposed to 9/10 of the NES ones. Though Yoshi's Island I have on the SNES, so that technically makes 3 on GBA.