In November, people will be able to relive their earlier Dream Land experiences in 3D. 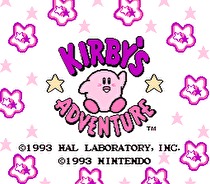 Kirby's Adventure is the next 3D Classic, according to Nintendo of Europe.

Set to come out in Europe on November 17 for €6, it is a 3D-enhanced version of Kirby's 1993 NES debut. A North American release hasn't been announced, but given how releases have been in the two regions, it is likely to come out in November.

In Japan, Kid Icarus was revealed to be a 3D Classic, meaning that these two are the final two games in Nintendo's batch of six.

This is the first 3D Classic that I'm actually interested in buying. I hope they don't give up making these.

Nice!  I may not be able to resist this one.

I KNOW I won't be able to resist buying this one! a kirby game in 3d is enough to make me buy such a thing.

This is the only good game of the six 3D Classics.

They said they had 6 in the pipeline, so either this or Kid Icarus is the last one.

Either way, HOOK IT TO MY VEINS.


i doubt it will the last game, i'm betting they make a ton of money on these games because people are desperate for new content . It might be work, but it would be worthwhile business move to keep this up