Players will be able to manipulate gravity in this unique DSiWare effort. 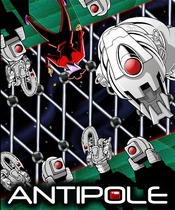 Saturnine Games's DSiWare game, Antipole, will be released on July 21.

The game is an action platormer where players use the power of gravity to escape obstacles, destroy enemies, and reach new areas. In addition, players can collect coins that give them access to challenge levels. Other modes include a race against the clock mode and a hard mode.

Antipole has been given a 500 DSi Point ($5) price. You can read our impressions of the game here.

The game has been released on XBox Live Indie Games already if you want a taste of it now.

This sounds interesting. I've never heard of it until now, but I'll probably pick it up next week. I'll have to clean the fridge, though....

Gravity flipping is one of my favorite game mechanics, so I'm at least mildly intrigued.

I agree, it's a great mechanic. I loved the stages in Mario Galaxy that used it, and I'm a huge fan of VVVVV.