The top entries produced at the annual Nintendo Game Seminar will arrive soon. 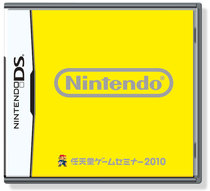 Four Nintendo DS titles, Planetaria, FloWoooot, The TENTAI-Show, and Pull Pull Pully, were deemed by Nintendo as the best games submitted from their annual Nintendo Game Seminar. Nintendo has applied for trademarks for the four names in Japan. The release of the games, however, has been delayed.

Each year, students have the opportunity to learn game development, including design, programming, and sound direction, through a ten-month program. The students split into groups to develop their own DS games. In previous years, Nintendo has released the top four games free of charge through the Nintendo Channel on Wii, DS Station, and Nintendo Zone.

The games, first revealed in the March 31 edition of Famitsu, were originally set for a staggered release beginning on March 16, but like many games in Japan, their debut has been delayed to an unspecified date.

I hope Nintendo comes out with a compilation some day. They've been doing this for a number of years, but their distribution was very limited, and except for a few that were ripped from kiosks, are not available in any form. Many of these students eventually became Nintendo devs.

I wonder whether Virtual Platform has anything to do with the 3D Platforming demo from E3.

My hopes are too high... I want to think it has something to do with being able to download titles and play them on any (compatible) system... i.e. Download Super Mario Bros. on the Wii and be able to play it on the 3DS...