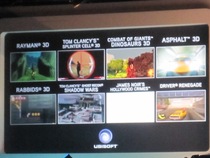 Ubisoft has announced release dates for some of their confirmed launch window Nintendo 3DS titles for Europe.

Asphalt 3D is a racing title developed by Game Loft. Rayman 3D is a 3D version of Rayman 2, which was released on Dreamcast. Of the Tom Clancy titles, Shadow Wars is a turn-based tactics/strategy game played from a top-down perspective, and Splinter Cell 3D is a remake of Chaos Theory, the third game in the series.

A week later on April 1, two more games will follow. Rabbids 3D, which is a 2D platformer based on the Rabbids Travel Time games, and Combat of Giants: Dinosaurs 3D, the latest in the series Combat of Giants series.