Nintendo might have underestimated the popularity of the anniversary bundle. 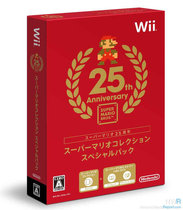 In less than a month, Super Mario All-Stars: Limited Edition has sold out nationwide. With no new shipments of the game scheduled, the only way to obtain a copy is to pay up to three times the retail price on eBay.

For those bummed about missing the boat on the original print, Nintendo is considering a reprint of Mario’s latest Wii game. In an interview with Wired.com last Friday, Marc Franklin of Nintendo’s public relations team said "Because of the strong response, we are exploring the option of bringing this item back at a later date."

Nothing has been finalized yet, but he did say, "Until that decision is made, consumers should check with retailers, as supplies will vary by store."

Too bad this doesn't say " Nintendo may decide to re-imagine the 25th Aniversy package and actualy release some upgraded worth while content that their true fanbase really wants." But that's muscle being a cry baby, and the strap line is way to long...

Well, we already got Super Mario Galaxy 2 last year.
I guess it would've been really cool if they made a new, sprite-based Mario platformer for the 25th anniversary.

I thought one shop being sold out was a one off. I don't see why people are so peeved about this game, I got my copy the day after it came out and enjoyed it. It's not a brilliant package but the upgraded graphics and extras are worth the £20 I spent on it.

I wish they would do this for Metroid Prime Trilogy release so I could get the game without inflated prices.

In other words, Nintendo is thrilled that they made a lot of money from doing almost no work, and now they want even more money from doing even less work.  Nothing surprising there from Nintendo.

I can't say I'm surprised to see this, but there are a few things they should consider before producing a second run:

1. This game was released in the middle of December, everything sells out during the holiday season.
2. A lot of people rushed out to get it simply because it is a limited edition.
3. Releasing another run kind of undermines the folks who bought it under the impression that it truly was a limited edition.

At the least, if another run is made, they should have different packaging to distinguish them from the first edition.

I wish they would do this for Metroid Prime Trilogy release so I could get the game without inflated prices.

Same here, I wouldn't mind playing through the first two games again with Wii controls. Since I already own all three games then the prices it goes for aren't worth it. Unfortunately, the game didn't seem to sell very well, so Nintendo sees no reason to put it back in production.

In other words, Nintendo is thrilled that they made a lot of money from doing almost no work, and now they want even more money from doing even less work.  Nothing surprising there from Nintendo.

I have no doubt most companies would do the exact same thing if they could get away with it.