The Super Mario All-Stars package will be released in Europe in December. 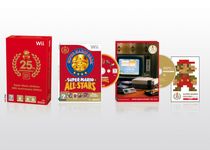 The complete package as released in Japan, with Super Mario All-Stars for Wii, a booklet detailing Mario's history, and a soundtrack CD with tracks from 25 years of Mario games is included in the red box set. Pricing remains to be announced.

Interesting. I'm actually surprised that this is being released outside of Japan, I didn't think it would.

When was Super Mario Brothers released in Europe? Does the release of this game coincide with the 25th anniversary?

Well, that probably confirms that we'll get it in North America as well.  It's encouraging that the European release contains both the booklet and the soundtrack.