4 Heroes of Light Has Depth of a Console Final Fantasy

Final Fantasy: The 4 Heroes of Light has received some criticism during the past few months due to its childlike visual style. Some gamers have dismissed it as a children’s title and deemed it as not suited to franchise veterans. 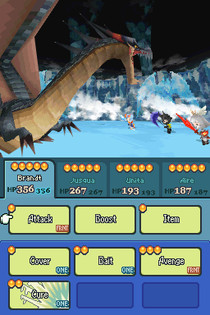 Today, Square Enix’s Klee Kuo cleared the air surrounding the matter by saying that even though Final Fantasy: The 4 Heroes of Light has a visual appeal that will interest a wide variety of demographics, the game has the depth of a console Final Fantasy title. He later went on to say that the game is also perfect for novices to the series.

Final Fantasy: The 4 Heroes of Light is set to be released in North America this October.

It's good for them to clarify this because until now I was complete ignoring it.  I just had gotten used to the idea that ANY Final Fantasy game that isn't part of the main series and doesn't have "Tactics" in the title is just a lame spinoff.

I wonder if game companies in general realize that about spin-offs.  The idea is that those games will sell on the brandname but if the target market starts to associate the spin-offs as being of lesser quality then they get used to ignoring them.  This is something I've become used to - spotting the "real" titles and ignoring the rest.

The fact that they had to come out and actually defend 4 Heroes of Light made me simile. However I think that's as far things might go. I just wish someone would call them on this more.


To be honest I've given up on anyone in gaming "journalism" actually confronting Square-Enix about their Final Fantasy offerings on Nintendo handhelds and consoles. It's either a dumping ground for their old series so they can make some quick money to help finance their "true" Final Fantasy games or they pawn off spin-offs and childish games on the systems which I feel clearly don't have a fraction of the effort or care as the primary Final Fantasy series. Won't even go into budget.


I agree that Tactics though seems to have escaped this spin-off problem.


While I enjoyed The Crystal Bearers for what it was I was disappointed in the and I've sworn to myself that it will be my last Final Fantasy game. I didn't even bother with Final Fantasy 13 and not going to even if I see it used. After Kingdom Hearts 1 I haven't touched that series and don't plan to in the future. I'm really just tired of Square in general and I think the last time I actually really enjoyed what they offered was Final Fantasy 9. X was eh and the only reason I have FF12 is because it was a gift from my parents since they knew I was a FF fan. I don't think I even got a third of the way through before I had enough. The only reason I haven't decided against Dragon Quest 9 is because it's an Enix game and not Square game.


It isn't even due me perhaps being burnt out on RPGs. I loved Lost Odyssey and Mass Effect. Dragon Age was a lot of fun. Blue Dragon was enjoyable. Tales of Vesperia is great and long (still playing it) and Tales of Symphonia was one of the best RPGs I played in recent years. Baiten Kaitos was great and I'm really looking forward to Xenoblade and The Last Story. So I don't think I'm tired of RPGs. It has to be FF and Square.

Is this game a spin-off? I thought it was a remake of the first Final Fantasy game on the NES.

The fact that they had to come out and actually defend 4 Heroes of Light made me simile. However I think that's as far things might go. I just wish someone would call them on this more.

Not totally sure what you mean.

I've played through a good deal of "4HoL" (japanese version), and it's a great game, far better than most FF games in my opinion.

It has lots of hoary old RPGisms (random encounters!), but it also just drips with charm, and that hasn't been true of any FF game since about 1994 as far as I can tell... (the "crystal" games were just sort of freaky I thought)...

In other words, Square may suck generally, as may their FF spin-offs -- no argument there -- but I think 4HoL is a fine game.  It's a minor but welcome counter-example to Square's general awfulness.

Final Fantasy III DS is my favorite out of the NES Final Fantasies games remade.

Not totally sure what you mean.

I hope I can explain it. A lot of the non-Sony FF (not including pre-PlayStation here) titles aren't that good.  In many ways what they've offered are what some could consider to be "kiddified versions" of the franchise. From Chocobo games to games that look like this. It paints an picture that these games are for children and clearly are not on the level in terms of effort and worth as the PS1, PS2, and PS3 FF games. Comparing non-Sony FF products to the Sony products and I think that belief is very solid. That they had to defend the look of this game means that impression isn't lost on others as well as others are talking about it. I think it is something Square should be called out on because it goes to how they view the actual customer base on Nintendo systems and how they think they can get away with just pawning off for lack of a better word at the moment trash and think that it will sell on the Final Fantasy name alone. That they have to say that it's like a console offering in terms of content I think is a good thing and shows they on some level know how their offerings have been interpreted.


However I don't think it will go beyond that though. Don't think I care anymore.