Interview - Gunman Clive's Bertil Hörberg: The Good, the Bad, and the eShop

Learn the ins and outs of this upcoming eShop Western. 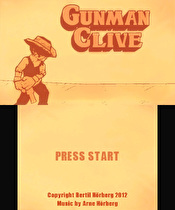 Gunman Clive is exactly what the eShop needs right now. Releasing just under a year after Mutant Mudds, it's a great way to again sharpen those nostalgic, action-platforming teeth of ours. But, no matter how honed your skills have become over the years, death will come often in this game. Fortunately, that just means playing through those same well-crafted segments once again.

Gunman Clive puts you in the worn, leather boots of a hero saving his lady (or as a heroine rescuing her man, as you'll soon find out). Those boots are put to good use, as you'll need to navigate the Wild West, relying only on your jumping skills and revolver.

But it's not just common cowpoke you're facing—your enemies come in many shapes and sizes. As I said. it's the Wild West, and at times it can be very wild indeed. Buzzards, bombs, and bionic commandos are just a sampling of the enemies you'll face.

We spoke with Bertil, the mind behind Gunman Clive, to learn about the game's beginnings, the advantages of the 3DS eShop, and what makes the 3DS version stand out.

Nintendo World Report (NWR): What was the process in creating Gunman Clive?

Bertil Hörberg (BH): I first started working on it years ago. I had just finished work on a 2.5D retro remake for XBLA and thought it would be fun to do another 2.5D platformer on my own, but didn't get very far before putting it on hold. A while later I started working on my own 3D engine and ported the game to the new engine and continued the work for a bit. At some point I did a version for Wii homebrew. But then I got a new job and put the game on hold. I also started working a bunch other projects in between. Finally, when I started my own business as a smartphone developer last year, I eventually picked it up again and started working on it properly. 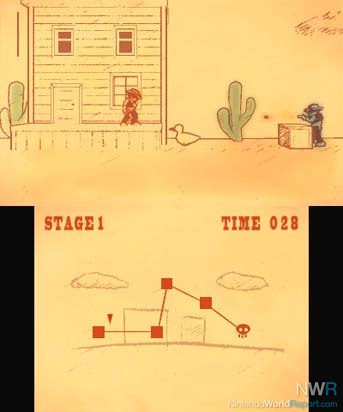 NWR: What works have inspired your game?

BH: I'm borrowing quite heavily from a lot games. The biggest inspiration is without a doubt Mega Man, but there are some heavy influences of Castlevania, Contra, Donkey Kong Country, and Super Mario Bros. 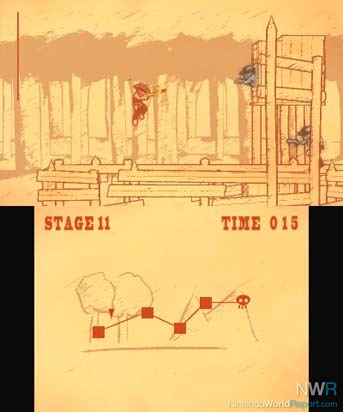 NWR: In the trailer, you poke fun at the game, calling it a "generic old-school shooter." Funny enough, that remains a genre we don't see much of on the 3DS or the eShop. Despite your ribbing of Gunman Clive, it actual comes across as a unique rarity. Do you see sticking to a classic genre as beneficial?

BH: There's been a lot of indie platformers that try a bit too hard to add a twist to the genre or rely on gimmicks to stand out. Sometimes it works great but sometimes it just feels forced and arbitrary and not particularly fun. So I wanted to make something very straightforward and just focus on making it as good as my ability would allow.

However, making a game in a classic genre without any unique gimmicks does make it very hard to stand out. Especially as a small developer who can't compete with production values. For Gunman Clive the art style really helped give it an identity in the end, as well as speed up the development.

NWR: Why are you bringing this title to the 3DS? What does the eShop offer that made it appealing to you?

BH: I feel more at home making games for dedicated gaming platform with physical buttons than for smartphones. I'm also hoping the eShop can give me more exposure than the App Store jungle. 3DS eShop seemed to be the easiest market to release a game on and the platform best suited for the types of games I make. Also I have a certain fondness for Nintendo handhelds. My first gaming console was the Game Boy, and some of my first coding experience was in the homebrew scene for Game Boy and later GBA.

NWR: What 3DS specific features are new to the game? 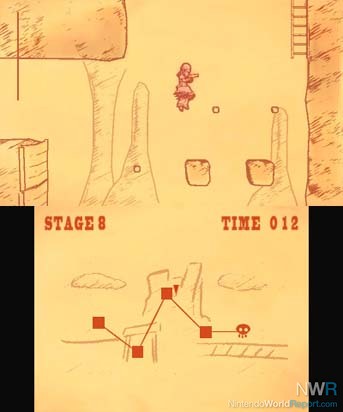 NWR: You're hoping to release Gunman Clive at the same $1.99 price point it sells for on iOS. In most situations, the 3DS version has sold for more than its competition. Why are you attempting that same price?

BH: I'm not really a big fan of the $1-2 app business model, and I don't really have any data on eShop sales to judge whether or not it's a good idea to go that low. But having had the same game available for months on other platforms for that price it would feel weird to have a premium price on 3DS.

NWR: Have you rebalanced the game now that it's played with physical buttons?

BH: Not really; from a gameplay perspective it was always designed for physical buttons, and shoehorned onto smartphones. Some people complained that it was too hard with touch controls, so it doesn't hurt if it's a bit easier to play. The game has three difficulty modes, so it should still be a decent challenge.

NWR: What appeals to the "Nintendo gamer?" What about Gunman Clive appeals most to a customer of the eShop?

BH: While the game appeared first on smartphones it was always designed more towards Nintendo gamers. It's mostly designed as a NES or Game Boy game, and I'm borrowing ideas from a bunch of classic platformers. Those are the games I grew up with and the only types of games I really understand well enough to make. So I hope people who like Mega Man, Castlevania, Mario etc will enjoy it.

NWR: Did the sepia tone come before or after the western setting?

BH: The two came at about the same time. I had already made a pretty substantial prototype years before, with more traditional shaders and with robots as enemies, but once I started production I had trouble getting excited about the project. So I started thinking about how to give the game a stronger identity and make it feel a bit more unique. At first I just tried redesigning the main character by giving him an Stetson, but I still wasn't really planning to go for a full Western theme. Then I did some experimentation with the shaders and the art style, and suddenly everything came together. Somehow seeing a cowboy with this type of shading just felt right, so I changed the setting completely. 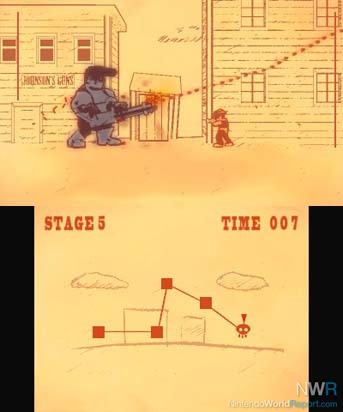 NWR: Difficulty is always an interesting aspect of action platformers, with many recent titles skewing for an older, nostalgia-infused difficulty. Where does Gunman Clive fall?

BH: It's not designed to be an extremely hard game but it should still be a decent challenge for most gamers. That being said, in some ways it's closer to retro games than some modern platformers known for their difficulty. The levels are fairly long without any checkpoints. A lot of indie platformers focus more on extremely hard, extremely small challenges, which I'm not very fond of. While it can get frustrating when you're pushed back too far and have to replay a big chunk of the level; if it's all isolated challenges with checkpoints everywhere there's very little tension.

NWR: The "weight" and physics behind a character's jump is very important to players, and appears to be a tough nut to crack for some developers. How do you arrive at the "right" feeling? Did you model it after any other titles?

BH: I didn't directly model it on any specific game, or compare it much to others. I just tweaked it until I liked the feel.

NWR: Thanks so much for your time, I look forward to the final release!

The art style is fantastic. I'm pretty excited that we might get a quality 2D platformer for such a low price!

"There's been a lot of indie platformers that try a bit too hard to add a twist to the genre or rely on gimmicks to stand out. Sometimes it works great but sometimes it just feels forced and arbitrary and not particularly fun. So I wanted to make something very straightforward and just focus on making it as good as my ability would allow."

Mr Horberg, will you marry me?

I bought and played this game on an iPod Touch. The aesthetic is very cool as are some of the bosses. Slick jump and shoot gameplay.
I felt the game was a bit too short, however. Beat it in a few sittings. Granted, I did not replay the game on Hard after beating it initially.
Kudos to the dev for releasing it at the same pricepoint on 3DS, would have thought the "3D" feature and the "buttons" feature would double the price.

2$/2€ is a nice price. Although I would've paid more for it, I want these devs to get more money for themselves.